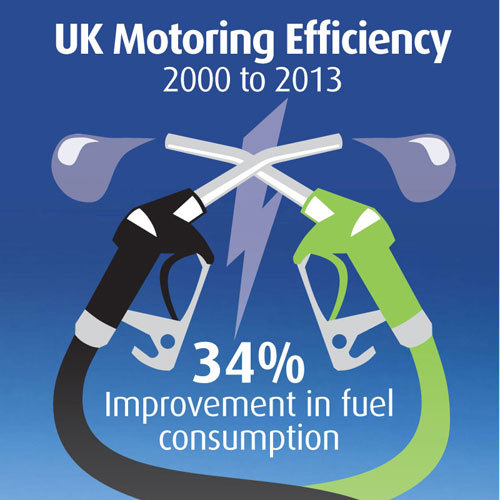 Motoring is cheaper today than it was a decade ago. (see infographic) In real terms travelling in a new car costs 13p per mile in fuel, compared to 15p back in 2000 (inflation adjusted). Sust-it’s analysis of the Vehicle Certification Agency (VCA) emissions testing data reveals a 34% improvement in fuel efficiency across car manufacturers ranges. In the last thirteen years the average miles per gallon for new petrol cars has jumped from 32 to 43 mpg and diesels from 43 to 58 mpg.

Sust-it has examined the energy efficiency, between 2000 and 2013, of manufacturers with 500 or more UK model variants, and found that the top ten most improved brands are Kia, BMW, Hyundai, Volvo, Toyota, Mercedes, Fiat, Honda, Peugeot and Subaru. Kia’s model range is top with a 46% more fuel-efficient range in 2013 versus 2000. Premium brand BMW is chasing hard with fuel-efficiency improvements of 42%. Unsurprisingly, small car manufacturer Fiat has the most fuel-efficient model range – with Seat, Skoda, Citroen and Peugeot in pursuit.

In addition Sust-it has delved into the recently published electric vehicle testing data and found that the running cost of these vehicles is less than half that of even the most fuel efficient diesel cars. The Renault Clio 4 dCi 90 ECO diesel costs around 7.5p per mile, compared to 3p mile for the electric BMW i3; that’s 56% cheaper to run. In environmental terms, electric cars have zero emissions whilst moving – reducing pollution in towns and cities. However, if you factor in the power station CO2 emissions in electricity generation required to charge the batteries, the green benefits become less clear. The diesel powered Clio 4 dCi 90 ECO emits 83 CO2g/km, whilst the power station emissions to charge the electric BMW i3 are 69 CO2g/km, based on the average UK mains electricity supply.

Ross from Sust-it said, “My concern is that electric vehicles are being promoted as a greener option than they actually are. Zero tail pipe emissions are only half the story. It would be more realistic to include the CO2 emissions produced in electricity generation, required to power these vehicles, on the showroom energy labels and in advertising.”

The Sust-it energy efficiency website, founded in 2006, ranks products by their energy usage and CO2 emissions. It does this through calculations of average usage, combined with carefully researched energy usage data published by manufacturers and government agencies. Sust-it is constantly updated and contains a wide range of products from Cars to Chest Freezers.

The website was conceived and developed by TurnRound Ltd, after it’s proprietor Ross Lammas, became increasingly frustrated by the difficulty in finding the data on the energy consumption of products, whilst he was building an environmentally sustainable office and home. Sust-it is independent from any manufacturers, retailers or energy companies. And does not receive any funding from Government agencies, trusts or independent charities.

Consumers can compare electricity tariffs and calculate their CO2 emissions at the same time. The electricity unit rates used to calculate the costs per hour/cycle/year are based on the BIS (Department for Business Innovation & skills) Quarterly Energy Prices.

Electric car CO2g/km figure takes into account CO2 emissions produced in electricity generation using The National Energy Foundation formula for UK mains electricity. The electricity CO2 conversion factors used represent the average carbon dioxide emission from the UK national grid per kWh of electricity used at the point of final consumption (i.e. transmission and distribution losses are included). These figures do not include emissions resulting from production and delivery of fuel to these power stations (i.e. from gas rigs, refineries and collieries, etc.).

The Vehicle Certification Agency (VCA) publishes fuel prices and consumption figures used by Sust-it. Fuel economy/CO2 figures are from the Vehicle Certification Agency 2000 to 2013 (data set 4470 vehicle variants). The fuel consumption figures quoted are obtained under specific test conditions; they may not be achieved under ‘real world’ driving conditions.