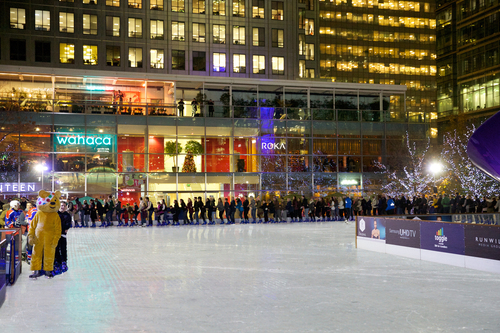 Last night, Ice Rink Canary Wharf in association with Tresor Paris broke the world record for the longest conga on ice in aid of BBC Children In Need.

353 skaters including the London Bulldogs ice-hockey team, Ruff Diamond, XYRA, Brick city all donned their ice skates and were led by Pudsey Bear in the world record attempt,whilst a 200 strong crowd and celebrity guests such as Richard Blackwood eagerly cheered on.

The previous world record for the longest conga on ice is 274 people and was achieved by The Alexandra Wylie Tower Foundation (UK) at Alexandra Palace Ice Rink in London.
Ice Rink Canary Wharf have broken this record with 353 participants.*

The star-studded event was attended by a host of TV stars, comedians, and X Factor contestants amongst Canary Wharf VIPs and charitable members of the public, all of whom were there to raise money for BBC Children In Need.

The conga followed the traditional manor for five continuous minutes, wrapping around one of the capital’s largest ice rinks based in Canada Square Park and along the skate path, a unique feature of Ice Rink Canary Wharf.

The event also featured a raffle with prizes including membership to Reebok Sports Club and a three course meal for two at the Marriott Manhattan Grill Restaurant to a backdrop of live jazz by Lizzie Dean at the pop-up Boisdale Jukebox bar. Over £2000 was raised on the night but the fundraising efforts will continue up until the live show on Friday.

Tresor Paris, the headline sponsors of the Ice rink Canary wharf showcased their exclusive BBC Children in Need jewellery, with 25% of the proceeds going directly to the amazing charity. With six distinct pieces all featuring the loveable Pudsey the Bear, Tresor Paris has provided their signature sparkle on these gorgeous sterling silver pieces with a yellow crystal belly button. Each BBC Children in Need piece can be purchased for under £30. You can buy these online at: http://www.tresorparis.co.uk/limited/children-in-need-charit...

Tresor Paris are also auctioning off custom made crystallised ice skating boots, showcased at the rink.These boots, the only pair in the world are worth over £4,995 and are adorned with over 6500 crystals and are open to bids and expected to raise a generous sum for BBC Children In Need. Please go to http://www.tresorparis.com to place your bid.

Ice Rink Canary Wharf is also proudly sponsored by Canary Wharf Group, Samsung UHD TV, Dow Jones, Heineken and Toggle Mobile and is supported by media partners The Wall Street Journal and Runwild Media Group.
Situated in the heart of Canary Wharf, the ice rink is just one of the many attractions on offer. Home to 300 shops, cafes, bars and restaurants within four retail malls, Canary Wharf is the perfect destination for a shopping trip or evening meal.

Open seven days a week with the exception of Christmas day – visit http://www.icerinkcanarywharf.com for the full schedule of skating session times.

Canary Wharf Group has achieved one of the greatest feats of civil transformation – an iconic urban regeneration, designing and constructing over 16 million square feet of office and retail space across its 97 acre East London Estate. There are 300 shops,bars and restaurants at Canary Wharf. Canary Wharf’s world-class Arts & Events programme includes over 100 events each year. Canary Wharf Group plc (CWG) is an integrated property development, investment and management group of companies.
http://www.canarywharf.com

Renowned for its expertise in the diamond industry, Tresor Paris was born through a Parisian inspired exquisite crystal collection. Defined by a unique, elegant style which embodies energy and sparkle, Tresor Paris’ iconic collections have formed a reputation for timeless appeal coupled with lavish and innovative design.