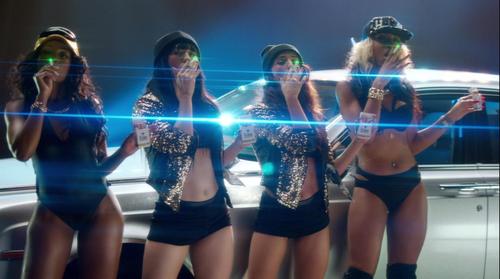 We’re very proud to be part of a video of a major global artist like Lily.

E-Lites once again broke new ground this week after proudly featuring in a new music video. The UK’s biggest electronic cigarette brand appears in the video for the new Lily Allen track, “Hard Out Here”.

The video, which was released online via Twitter on Wednesday, takes a satirical look at contemporary music videos, and received over a million views on its first day online. Lily Allen is a household name, having scored two multi-platinum albums and countless hit singles around the world.

E-Lites were the first electronic cigarette company to air a TV advert, then the first to enter major sport sponsorship and now once again lead the way by stepping into new realms. This music video appearance for E-Lites caps off a significant year of growth for the brand, having enjoyed success with the British Superbikes season, and teamed up with Celtic, Rangers and Derby County football clubs, Worcester Warriors Rugby, and are official partners of The O2 arena in London.

Trevor Field, Sales & Marketing Director said, “We’re very proud to be part of a video of a major global artist like Lily.”

“E-Lites take our responsibilities as market leader seriously. We want adult smokers to get clear messages about the benefits of switching to E-Lites and by appearing in this video, we can showcase our product and its significant advantages, such as the ability to smoke indoors without affecting others, as there’s no smell or passive smoking.”

“Smokers are switching to e-cigarettes at an accelerating rate with official figures showing more than 10 times as many smokers are using e-cigarettes to quit cigarettes than a year ago. There is an e-cigarette revolution underway, and being part of a major music video helps to demonstrate that.”

1. Government figures show that smoking rates in Scotland are higher than elsewhere in the UK with 25% of men and women smoking. Scottish Smoking Data: Office for National Statistics: General Lifestyle Survey: Smoking and drinking among adults, 2009. London: ONS; 2011.
2. Professor John Britton of the Royal College of Physicians told the BBC that “If all the smokers in Britain stopped smoking cigarettes and started smoking e-cigarettes we would save 5 million deaths in people who are alive today”
3. E-Cigarettes are immensely safer than tobacco cigarettes: The NHS website says that they have 1,000th of the toxicity of tobacco ones. NHS on E-Cigarettes: http://www.nhs.uk/news/2013/06June/Pages/e-cigarettes-and-va...
4. Medical opinion is increasingly backing e-cigarettes which have grown so quickly that 1.3 million people in the UK now use them to help them switch from tobacco. On 23 July 2013 the globally respected Lancet medical magazine published an article showing how important they are to reducing tobacco use The Lancet: http://www.thelancet.com/journals/lanres/article/PIIS2213-26...
5. In June 2013 the Polosa study demonstrated how smokers who didn’t plan to stop smoking were giving up completely after experimenting with e-cigarettes. Polosa, June 2013 http://www.plosone.org/article/info%3Adoi%2F10.1371%2Fjourna...
6. E-Lites believes tight regulation of product quality and safety is important
7. Established in 2007, E-Lites is now the market leader in the rapidly growing electronic cigarettes market.
8. E-Lites has significantly invested in customer research to ensure its design and quality is of the highest standard and delivers the most authentic smoking sensation possible. The company’s manufacturing facility uses the latest micro-electronic technology, ensuring E-Lites set the standard within the electronic smoking industry.
9. Michael Ryan, Chairman of E-Lites, is also Chairman of the Electronic Cigarette Industry Trade Association (ECITA), a representative body which provides advice, guidelines and support to members, as well as working to ensure the correct regulatory framework is applied to such products through a meticulous audit procedure. For more information, visit www.ecita.org.uk

This press release was distributed by ResponseSource Press Release Wire on behalf of E-Lites in the following categories: Entertainment & Arts, for more information visit https://pressreleasewire.responsesource.com/about.