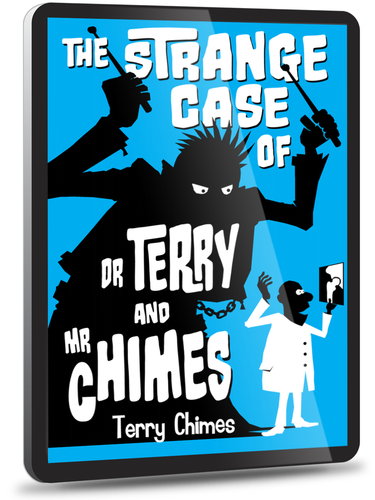 The first autobiography by a founder member of The Clash

Terry Chimes has just released his autobiography, the first member of The Clash to do so.

'The Strange Case of Dr Terry and Mr Chimes' has initially been released by Crux Publishing as an ebook for kindle on Amazon. The paperback is to follow in December.

ABOUT THE BOOK
The Strange Case of Dr Terry and Mr Chimes covers the life of a man who made a successful transition from the original drummer of The Clash (he left the band in 1977 only to be asked back in 1982) and a succession of punk and heavy metal rock bands (Generation X, Hanoi Rocks and Black Sabbath) to a highly successful chiropractor offering kind words of wisdom and compassion to those in need.

Told with humour and empathy, we learn about Terry’s childhood, about how he got into the world of rock and roll and about the early years of The Clash. Terry tells of why he left the band in the first place and the spiritual insights that have guided his life. The book includes a wealth of true stories ranging from wild antics on the road with a touring rock band to the challenges of carving out an entirely new career.

ABOUT THE AUTHOR
Terry Chimes was a founder member of The Clash, later playing with Billy Idol, Black Sabbath and many others. In 2003 he was inducted into the Rock and Roll Hall of Fame. After 15 years in the music business he left to pursue a career in alternative medicine. He currently runs Europe’s largest consulting business in alternative medicine.

The book is available from Amazon.
http://amzn.to/1e5zHPc

Terry Chimes is available for radio, TV and other media interviews.

The first autobiography by a founder member of The Clash