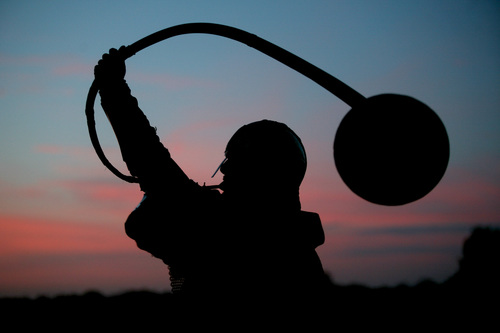 The sound of an ancient horn heard reverberating across the rooftops of York this evening is a portent of doom and the beginning of a countdown to the Norse apocalypse, according to experts in Norse mythology from the JORVIK Viking Centre.

The horn belonged to the Norse god, Heimdallr, who was said to blow the mythical Gjallerhorn to warn that Ragnarok – the Viking apocalypse – will take place in 100 days. Experts are predicting the end of the world will take place on 22 February 2014, coinciding with the grand finale of the 30th JORVIK Viking Festival in the city of York.

“Ragnarok is the ultimate landmark in Viking mythology, when the gods fall and die, so this really is an event that should not be underestimated,” comments Danielle Daglan director of the JORVIK Viking Festival. “In the last couple of years, we’ve had predictions of the Mayan apocalypse, which passed without incident, and numerous other dates where the end of the world has been pencilled in by seers, fortune tellers and visionaries, but the sound of the horn is possibly the best indicator yet that the Viking version of the end of the world really will happen on 22 February next year.”

According to the legends of Ragnarok, the god Odin will be killed by the wolf Fenrir and the other ‘creator’ gods will fall, before the earth is born anew for its human population.

“During the week of the JORVIK Viking Festival, we will be doing everything we can to equip the people of York, and visitors from afar, with the tools to survive the apocalypse, from hunting for the mightiest and strongest warriors to training children in combat skills,” adds Danielle. “Following a study published in 2010* that bearded men are more trustworthy than those without, we’re also looking for fantastic displays of facial hair, so that we can identify those with the potential to take us into the brave new world that is foretold to follow Ragnarok.”

The 30th JORVIK Viking Festival runs from 15 to 23 February 2014 at a number of locations around the city, including Parliament Street, Coppergate and St Helen’s Church. Visitors will even be able to dine like Viking Jarls in a very special night of music entertainment and feasting to mark the impending apocalypse to be held in the stunning setting of York Minster and the adjoining historical St William’s College on Friday 21 February.

More information about all the events in the 2014 JORVIK Viking Festival, including details of where to buy tickets, is now available online at www.jorvik-viking-festival.co.uk. There will also be dedicated social media feeds from @jorvikviking with the hashtag #ragnarok2014 and #JorvikVikingFest, including a daily countdown to the apocalypse, and on Facebook at www.facebook.com/JorvikVikingFestival

Other high-res images of the JORVIK Viking Festival are available for immediate download at: http://news.cision.com/jorvik-viking-festival