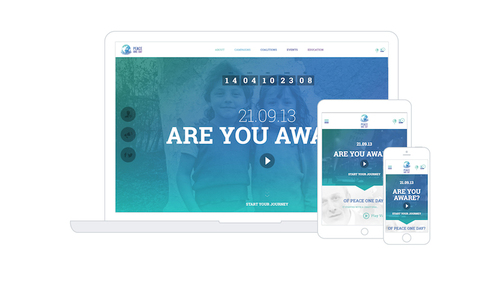 Thanks to the pioneering work of Ve Interactive, the new Peace One Day website is now more interactive, intuitive, and international than ever before

London, Tuesday 26th November 2013: Ve Interactive is proud to announce that the website that the company designed, built and donated to the Peace One Day organisation is now live

The multilingual, responsive design site was built to replace the original, English and Spanish-only website and has a navigation that draws people into the content, and instigates the concept of sharing information, by asking the question: ARE YOU AWARE?

Four percent of the world’s population (that’s 280 Million according to a McKinsey report), is currently aware of Peace One Day. The annual day of observance, which falls on the 21st September, has already been mandated by the United Nations, and provides an opportunity for humanitarian agencies to carry out life-saving activities in areas of conflict around the globe.

However, the organisation also extends its campaigns to address conflicts closer to home, from domestic violence, to bullying in schools. It’s become a very special day when activities in Education, Music, Film, Sport, Dance, Art and Online take place all over the world, independent of any government, political persuasion, corporation or religious creed.

The collaboration between Ve Interactive and Peace One Day came about after Ve’s Communications Director, Kathy Heslop interviewed the Peace One Day Founder - Jeremy Gilley for Ve’s blog. Subsequent conversations lead to Ve Interactive volunteering to build and donate a brand new website.

“The original site, whilst it was content rich, because Jeremy is a tireless campaigner and a talented film maker, was actually holding the organisation back,” explained Kathy. “It couldn’t deliver its content across multiple platforms or in multiple languages and the external e-commerce site had no intuitive pathway to it. It was therefore a no brainer for us to offer to help them. And here’s just one example of why we wanted to: In 2012, as a result of a Peace Day ceasefire in Afghanistan, aid agencies were able to go in and vaccinate 5 Million children!”

A major project for both parties, the new site now fully supports the push for awareness and action for the 2014 Peace One Day campaign.

“Thanks to the pioneering work of Ve Interactive, the new Peace One Day website is now more interactive, intuitive, and international than ever before. It is fully compatible with mobile devices, such as tablets and mobile phones, and is available in all six official UN languages, as well as Brazilian Portuguese. I am incredibly grateful to Ve Interactive for helping to providing Peace One Day with such an outstanding launch pad for our future campaigns, helping to put us on track to reach more people than ever before with the message of Peace Day. Check the new site out!” Jeremy Gilley, Founder of Peace One Day.

This is not the first time that Ve have done pro bono work for the third sector. They have also been donating their digital services to the International Development Agency, Concern Universal since July 2011. This collaboration won them a silver medal in the Stevie International Business Awards 2013 and last week they learned that they are also finalists in the upcoming Institute of Fundraising, Partners in Fundraising Awards 2014.

Continued Kathy: "I’m extremely proud of the Ve team, who willingly donate their time and services, and in doing so, help these vital organisations make a positive difference in the world.”