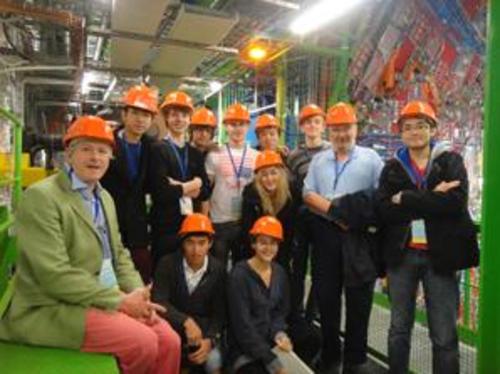 The LWC Upper Sixth Physicists took a trip to the European Centre for Nuclear Research in Geneva over half term; the home of the Large Hadron Collider (LHC) and the discovery of the Higgs boson. Everybody was just bowled over by the scale, the complexity, the precision and the ambition of the experiments. The LHC is 27 km long. Throughout its length it is cooled by super-fluid helium-3 at 1.7 degrees above absolute zero. It uses superconducting magnets to steer packets of sub-atomic protons around the accelerator at almost the speed of light, until they collide under four huge detectors. The computers analyse data from 200 million collisions per second, to filter and select the very few events that show new Physics.

As the LHC is undergoing an upgrade at the moment, the students had a rare opportunity to go underground into one of the detector chambers. There was an audible gasp when they realised the size of the Compact Muon Solenoid (CMS); one of the experiments that has isolated the Higgs Boson. The two guides, Lars and Alex were both very senior research directors at CERN and kept everyone enthralled with their assured and enthusiastic mastery of their field.

Whilst in Geneva the students also managed a visit to the Red Cross Museum where they learned of the roots, work and achievements of this organisation and, of course, no trip to Switzerland is complete without sampling a traditional Swiss fondue!