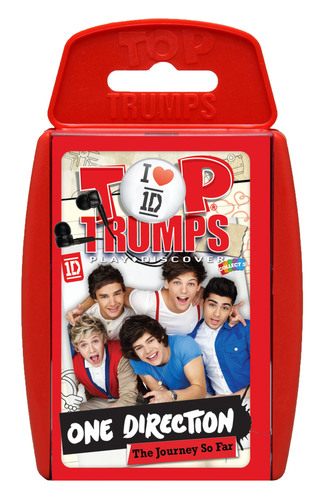 One Direction has scooped the Christmas number one spot by topping the Top Trumps chart of the best-selling Top Trumps packs for Christmas 2013.

Also securing a top ten position in the list revealed today by Top Trumps, are kids’ favourites Peppa Pig, Moshi Monsters and Monster High, plus official blockbuster movie packs, The Hobbit and Disney Planes. And in the year the Time Lord celebrates 50 years on television, the Doctor Who Top Trumps pack enters the chart at number five!

General interest packs are also proving popular this year, with perennial favourites ‘Dinosaurs’ and ‘Baby Animals’ both securing a top ten position. And with a nod to the 2014 World Cup, the brand new World Football Stars pack is flying off the shelves and into stockings, landing itself a number four spot in the Top Trumps Top Ten.

Top Trumps is the must-have for every stocking this Christmas. A firm playground favourite since it first hit shop shelves in the late 1970s, to date over 70 million packs have been sold worldwide. Top Trumps produces hundreds of different packs on a huge variety of subject matter: from Dinosaurs to Baby Animals; Manchester United to Moshi Monsters and Hello Kitty to Top Gear. New licenses for Top Trumps this year include One Direction, Monsters University, Disney Planes, Teenage Mutant Ninja Turtles and Diary of a Wimpy Kid – so there really is a pack for every member of the family! (RRP £3.99, age 5+)

ABOUT WINNING MOVES UK:
Winning Moves UK Ltd is an independently owned, London based, games company which owns and/or distributes a range of classic game brands such as Top Trumps, Regional MONOPOLY, Waddington’s Number One Playing Cards, PIT, Bananagrams and Pass the Pigs.

Winning Moves UK is also the exclusive licensee in Europe, Middle East and Africa for limited editions of Hasbro games including MONOPOLY, Cluedo, RISK and Twister.