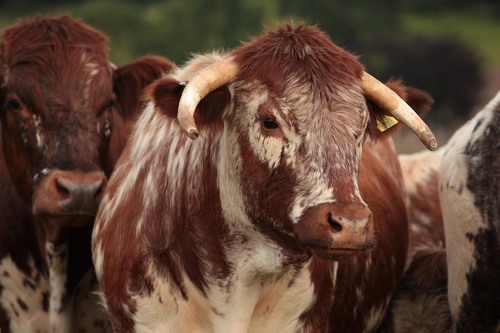 Rare breed beef, pork and lamb tastes fantastic but it’s also better for the planet, and us

A former restaurateur turned online butcher is urging people to buy more rare breeds because they offer “a major boost to our health and the health of the countryside”.

John Pallagi, co-founder of Farmison & Co, the online rare breed specialist, says rare breed meat is the “friendliest farm food you can buy” and if more people pledged to eat it, it could have a massive impact on the wellbeing of farm animals, the environment and our health.

“Rare breed beef, pork and lamb tastes fantastic but it’s also better for the planet, and us” says John. “It’s the ultimate slow food because rare breeds are not intensively reared, they’re fed a natural diet and reared in habitats that preserve precious ecosystems that would otherwise be lost.”

Farmison & Co offers the most comprehensive range of rare breed meats on the internet, from Shorthorn to Charolais, Masham to Manx Loaghtan, with more than 50 breeds of beef, pork, lamb and veal, available seasonally from British farmers.

“But we need to eat them to save them,” adds John. “Between 1900 and 1973 up to 20 breeds became extinct all together because they had fallen out of favour – and their genetic diversity, unique character and great taste was lost forever. The more shoppers demand rare breeds, the more farmers will rear them.”

Farmison’s Hereford beef, for example – one of England's oldest native beef breeds – is sourced from farmer Steven Airey, in the Lake District. His family has raised cattle on the land for more than 175 years, and they are naturally and slowly reared on grass and aged to produce dark marbled beef. Similarly, Farmison’s Shorthorn beef comes from Balsdon Butchers of Summerbridge in Harrogate, and is traditionally aged for 28 days, which gives it a unique flavour that has been championed by TV chef Sophie Grigson.

Farmison’s Texel Mule lamb – whose ancestors have long been regarded as a delicacy in French restaurants – is reared on Lord Cavendish’s Holker Estate in Cumbria, famous for its salt marshes, where they acquire a unique and striking salty taste derived from a diet of herbal grasses on the margins of the sea. The fact the sheep are reared here also helps sustain the precious marshland ecosystem.

Better for us
Rare breeds are not given artificial growth promoters – they are reared slowly and naturally meaning the meat is natural with no nasties.

Better for them
Many rare breed animals are farmed in free-range or organic systems, grazing on grass and allowed to roam free in natural habitats. They are reared slowly and not force-fed.

Better for the environment
Rare breeds are not reared intensively because they don’t do well in industrial farming systems. Instead, the animals prefer grassland habitats full of wild flowers, which help restore and preserve the countryside. Many of the farmers operate greener-farming systems too – with hedge building and initiatives to encourage wildlife. By buying from British farmers, you’re also cutting down on your food footprint.

More choice
More than 70% of meat sales in the UK are through the major supermarkets and rare breeds often do not fit with their strict criteria. Instead, most of the meat on offer is mass produced and much less tasty – and there’s usually less choice.

• Premium grocer and butcher Farmison was set up by friends and foodies John Pallagi and Lee Simmonds with a genuine determination to make it easier for shoppers to browse and buy great produce from small producers, previously only available to restaurateurs.