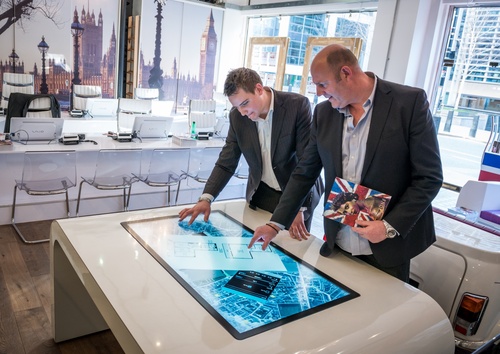 15th April, 2014, Bracknell, UK – 3M, the diversified technology company, has announced that its interactive multi-touch display technology is being used by one of London’s most prestigious estate agents, Garton Jones, as part of a SenseTable provided by UK firm Astec Technology.

Standing in the reception area of Garton Jones’ stylish Westminster offices, the SenseTable makes it easy for people to view and move seamlessly between floorplans, maps, images, video, online property searches and local amenities, all in one view and at the touch of their fingertips. The system supports up to 60 simultaneous touches, so several people can use the SenseTable at once.

The system makes it easier for a group of people to look at lots of information at once – including details about the local area, not just the properties - without the limitations of bits of paper or even having to swivel a personal computer screen backwards and forwards. The SenseTable creates a more dynamic viewing experience, using the kind of touch technology that people are already familiar with via their smartphones and tablets.

The table is part of a range developed by Sussex-based Astec Technology, which provides SenseTables as ‘all in one’ solutions, including the furniture, multi-touch screens, integration and software development if needed, as well as a remote support service.

Says Astec Technology’s Commercial Director Matthew Bates, “There’s been huge interest in the SenseTable range. We have a number of estate agents installing or adopting them and we’re also talking to other kinds of organisations, including retailers and automotive companies.”

The display uses 3M Projected Capacitive Technology (3M PCT), which supports high-speed multi-touch, even in multi-user and multi-tasking environments. 3M offers a range of multi-touch displays and systems from 18.5 inch to 47 inch screen diameters, with up to 60 simultaneous touch points.

About 3M
3M captures the spark of new ideas and transforms them into thousands of ingenious products.

With $30 billion in sales, 3M employs 88,000 people worldwide and has operations in more than 70 countries. The UK and Ireland is home to one of the largest 3M subsidiaries outside the USA, employing more than 3,000 people across 19 locations, including nine manufacturing sites.
Products manufactured in the UK include coated abrasives, personal safety equipment, adhesive tapes, industrial microbiology products, drug delivery systems, high-performance coatings and secure documents.

3M is a trademark of 3M Company.