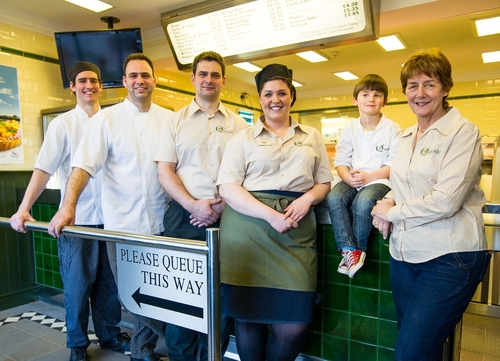 Quayside fish and chip shop and restaurant ¬– named ‘Best in Britain’ in 2014 – will be divulging the secrets to it multi award-winning fish and chips on BBC Countryfile this month.

Countryfile presenter and ecologist Ellie Harrison declared she “could see why the chips were winners” on her visit to the shop and restaurant last week with the BBC film crew in tow.

Filming for the programme, to be aired on Sunday, April 27 at 7pm, was expertly executed in just 20 minutes, but in that time the BBC team managed to bag a portion of Britain’s best chips to eat on the quay! The Countryfile producers were keen to find out exactly what goes into making Britain’s best chips, uncovering details about Whitby’s famous Fusco family and its ongoing dedication to sustainability.

Stuart Fusco, director and head chef at Quayside said “it was quite an unusual day serving customers and a film crew at the same time, but they loved our fish and chips! And it is brilliant to get our sustainable message out there: protecting our oceans and our fish for future generations of chippies and chip lovers.”

The 50-year-old family-run take-away was crowned Britain’s best fish and chip take-away in the Seafish National Fish and Chip Awards, 2014 and has become a big fish in a small pond with its own special-recipe crispy, golden batter and local potatoes fried the traditional way in beef dripping.

Carol Fusco – mum and Fusco lynchpin – started as a Saturday girl at Fuscos when she was just a teenager and has been at the helm of the business ever since, alongside sons Stuart, Adrian, Raymond and daughter Maria.

Quayside believes proper Yorkshire fish and chips deserves a place on the gourmet map of Britain, and have gone ‘back to the boats’ to ensure all their haddock, cod and plaice is sustainable. In fact, Quayside was one of the first British take-aways to hold the MSC (Marine Stewardship Council) Chain of Custody.
www.whitbyfishandchips.com

• Fusco's of Whitby owns three Whitby fish and chip shops – The Quayside in Pier Road, The Royal Fisheries in Baxtergate, and the Fish Box, in Langbourne Road.
• Stuart, who opened Quayside in 1999, scooped Young Fish Frier of the Year in 2004, and his three siblings – Adrian, Raymond and Maria – and mum Carol Fusco, all work in the family business together. (Again, just for consistency with other releases)
• More information on the MSC can be found at http://www.msc.org/