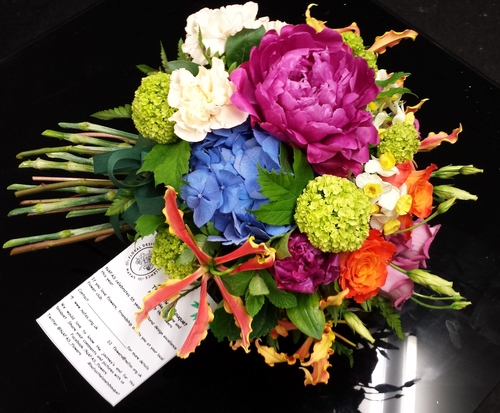 the charity plans to distribute over 60,000 bouquets across the UK embracing ‘The Lonely Bouquet’ concept on a scale never seen before.

BRIGHTENING UP THE UK
ONE BOUQUET AT A TIME

There’s no better way to say it than with flowers. Which is exactly why NAFAS (The National Association of Flower Arrangement Societies) is using beautiful little bunches to spread some love around the UK on National Flower Arranging Day (Friday 2nd May 2014).

In celebration of their Emerald Anniversary, the charity plans to distribute over 60,000 bouquets across the UK embracing ‘The Lonely Bouquet’ concept on a scale never seen before.

NAFAS Honorary Patron, TV’s Nicki Chapman who is one of the BBC’s RHS Chelsea Flower Show presenters, will front the campaign.

This spring, 61,000 NAFAS members will distribute mystery bunches of blooms across the UK. Flowers will be placed every-where, from park benches and shop doorsteps, to well-known landmarks and surprise locations. NAFAS hope that these small posies will find a home and brighten somebody’s day.

The random act of kindness initiative dubbed the ‘Lonely Bouquet’ was the brainchild of a young florist in Belgium named Emily Avenso, who blogged about the idea after leaving flowers for strangers two years ago. The idea went viral and ‘Lonely Bouquets’ have been distributed across the globe ever since. This year NAFAS is taking the concept one step further with the help of its members.

Sue Brinton Chairwoman of NAFAS, commented, “The concept is simple. We are asking all our members to make a bouquet, attach a tag asking, ‘Take me home and adopt me’, and leave the Lonely Bouquet in a spot where a lucky stranger will find it and give it a new home. With over 60,000 members we hope we will be able to communicate our love of flowers on a national level by becoming part of this great, heart-warming movement”

Nicki Chapman added: “The ‘Lonely Bouquet’ is a lovely idea which is fast gathering momentum around the globe. It’s a simple idea really with no ulterior motive other than to brighten somebody’s day and to spread the joy of flowers and floral design.”

NAFAS also hopes that by promoting the ‘Lonely Bouquet’ concept, it can in turn promote the flower industry itself and attract new members to join NAFAS clubs.

Nicki Chapman added; “With Kirstie Allsopp flying the flag for homemade crafts, Mary Berry teaching us how to bake and customised clothing becoming all the rage thanks to Claudia Winkleman’s Sewing Bee, now is the time to bring another great British tradition into the spotlight.

Floral design is a true art form and we hope that this huge initiative can help spread our passion across the UK. Keep your eyes peeled in case you spot a posy - it just might be the good home those flowers are looking for is your own!”

NAFAS will scatter 61,000 Lonely Bouquets across the UK from the beginning of May. The bouquet’s new owners are encouraged to post a message back to NAFAS, to let them know it found a good home.

The National Association of Flower Arrangement Societies was formed in 1959 and gained charitable status in 1984 in recognition of our educational aims. With approximately 1,200 Clubs and 61,000 members throughout the United Kingdom, NAFAS is in a unique position to encourage the art of flower arranging through the medium of plant material, upholding the principles of conservation and preservation of rare and endangered plants and flowers.

NAFAS is proud to celebrate its Emerald Anniversary this year. Over the years members have been involved in exhibitions, flower festivals, Chelsea Flower Show, RHS London Shows and many others. We also have National Shows packed full of competitive work and the opportunity to see presentations by leading Floral Art Demonstrators and Speakers. NAFAS was a founder member of the World Association of Flower Arrangers and a World Show is staged every three years in a different country, where visitors enjoy a shared experience through flowers.