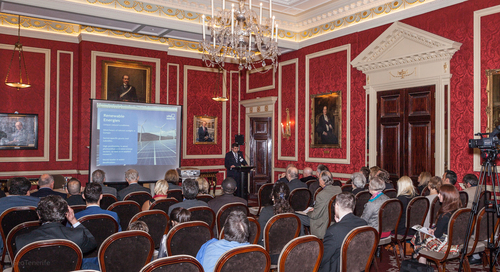 Scientific field-trip organisers GeoTenerife hosted a conference on sustainable energy on the island of Tenerife at the RAC Club at Pall Mall on Friday 2 May 2014.

The conference was well-attended by UK-based companies specialising in various areas of renewable energy, along with representatives from charities and educational institutes.

Sharon Backhouse, director of GeoTenerife and the event host, said, “There are a number of fabulous business collaborations available for British companies.

“People often see Tenerife as nothing more than a holiday destination, but there is so much more to the island than people realise, and hopefully our guests will make the most of these opportunities.”

The conference started with the attendees being addressed by President Carlos Alonso of the Island Government of Tenerife, who said, “We are keen to welcome scientists and students who wish to come to our small yet perfect paradise.

“Our sun, wind and waves are inexhaustible resources that we can no longer afford to waste.”

The Councillor responsible for Energy, Miguel Diaz Llanos, gave an informative talk on the various initiatives implemented by the Tenerife government. He specifically called for UK investors to submit tenders for their proposed RFP for a waste-to-energy project, full details of which will be announced by the Cabildo de Tenerife next month.

The introductory session of the conference, including the President's speech and the Councillor's full address can be seen on the GeoTenerife YouTube channel.

GeoTenerife has already received several requests for more information on this and potential solar energy investment on the island, and is currently organising investor trips to the island for UK companies that are keen to learn more and meet the relevant authorities.

GeoTenerife is a British company that coordinates scientific bespoke trips to the island of Tenerife for UK Universities. It also organizes conferences and webinars on the island, bringing experts from Tenerife to the UK.

Our desire to promote the potential of the island is backed by over fifteen years of experience in the field of renewable energy. We work with investors interested in projects in Tenerife and schools of all levels in the UK.

Our events are specifically coordinated to the requirements of each group responding with activities tailored to their courses and levels of study.

Our goal is to redefine the island of Tenerife: not just a sun and beach destination, the island has resources and potential to be a key destination for global travel and scientific study of the highest level.