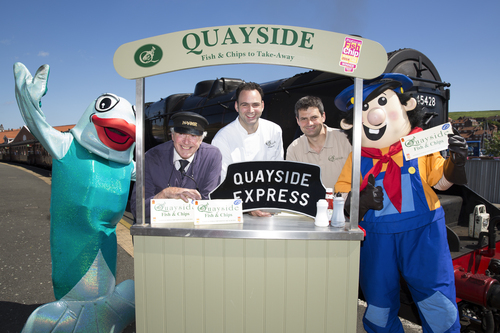 Britain’s number one fish and chip shop, Quayside of Whitby has collaborated with the North York Moors Railway (NYMR) to launch the ‘Quayside Express.’

The award-winning family-run fish and chip restaurant and takeaway and the volunteer led Railway are reinstating the age-old tradition of a special steam train service that combines a trip to the seaside with a delicious fish supper on-board.

From June 13th 2014 passengers can hop on-board the Quayside Express every Friday between Pickering and Whitby and enjoy a scrumptious fish supper, complete with Quayside’s famous homemade batter, sustainable fish and mushy peas, on the return trip from the seaside town.

“We feel privileged to have been able to join forces with such a prestigious heritage railway to offer this special service to holidaymakers and visitors,” says Carol Fusco, founder of Quayside fish and chip shop and restaurant, named ‘Best in Britain’ in the National Fish and Chip Awards 2014. “Day trippers can take in the sea air, stroll along the beach and work up an appetite for a slap-up fish and chip dinner on the last train home!”

“Fish was transported by rail, by the tonne from Whitby harbour in the early 20th century in order to fuel London’s fish and chip shops, and, since then, ‘fish and chips specials’ have been a long tradition on the railways so it’s fantastic to be reinstating such an old tradition with the help of Britain’s best chippie,” says Danielle Ramsey, marketing manager at the NYMR.

• A Quayside Express ticket includes return travel to and from Whitby, and Fish and Chips with mushy peas. Quayside Express passengers will be able to collect their meal on the last NYMR train from Whitby travelling through to Pickering and will be provided with cutlery and condiments on collection from Whitby Station.
• Book online now at www.nymr.co.uk
• Fusco's of Whitby owns three Whitby fish and chip shops – The Quayside in Pier Road, The Royal Fisheries in Baxtergate, and the Fish Box, in Langbourne Road.
• Over the last decade, it has picked up a raft of awards that include: ‘Independent Takeaway Fish & Chip Shop of the Year’ and ‘Marketing Innovation Award’ in National Fish and Chip Awards (NFCA) 2013/14; ‘Regional Champion North East – Independent Takeaway’ in NFCA 2012; ‘Top Fish & Chip Shop in Yorkshire’ in NFCA 2008; ‘Les Routiers Café of the Year’ 2005
• The North Yorkshire Moors Railway runs trains every day to Whitby until 2 November.
• The NYMR is an independent registered charity (no. 501388) which works to preserve and operate the Railway between Pickering and Grosmont (currently with 3 trains running onwards to Whitby) as a successful volunteer led community organisation. It is entirely dependent on its members, its passengers and welcome occasional grants from funding bodies to achieve its aims.
• Whitby station is owned by Network Rail and run by Northern Rail. The NYMR is working with both these partners, and the Esk Valley Railway Development Company.
• The NYMR welcomes approximately 350,000 visitors on-board its trains each year with visitors travelling from across the UK and around the world to visit the Railway and attend its many popular events contributing £30 million to local economy.
• In 2014 a second platform will be installed at Whitby Station, the scheme developed by the NYMR in partnership with Network Rail (and running under the NYMR’s project management) involves an investment of over £2m in Whitby’s railway facilities. The scheme is being supported by a £1.1m grant from the Round one of Government’s Coastal Communities Fund, and £850,000 from Network Rail.From the summer of 2014 the new platform will allow an increase from three to five in the number of NYMR trains a day to and from Whitby. The extra passengers on these trains should be a major boast to the local tourist economy, so vital to this region. The money will also deliver a package of enhancements to facilities for passengers at Whitby station for the benefit of all rail users, while the extra platform has the potential to enable more excursions trains to visit the resort. This scheme is expected to generate around 70 jobs locally and benefit the economy by around a further £6.5m yearly.