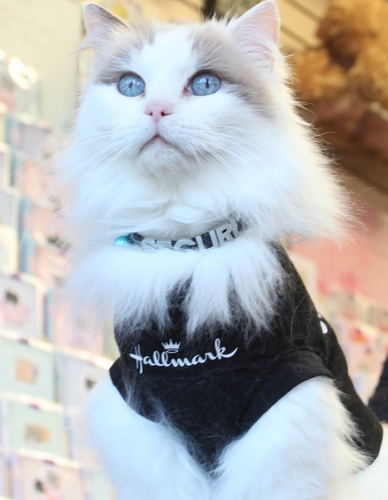 More than one third of British cat owners use Skype and Facetime to stay in touch with their feline pets, according to research revealed today, and half of the UK’s moggy mates say they’d rather spend time with their cat than with another human being.

And the myth of the crazy cat lady has been smashed, as it’s men who spend more time than women on the phone to their cat just so they can hear their beloved pet purr (23 per cent).

The poll of over 1,000 cat owners (aged 18-80,) conducted by card retailer Hallmark to mark the launch of its new Little Meow greetings card range, found that the nation’s kitties are living far from a dog’s life with more than 20 per cent being taken on family holidays and 15 per cent of owners confessing to serving their cat specially-made meals on a daily basis.

American film star Angelina Jolie was crowned the biggest cat-a-like with almost 70 per cent of owners claiming that their cat is like the actress, “sexy, sinuous and just a little bit dangerous”. What’s more, nearly 37 per cent of men have tried to teach their cat to perform tricks, with 11 per cent of them saying their cat can do so many special stunts they could enter them on Britain’s Got Talent.
The report also found that almost 30 per cent of women and nearly 18 per cent of men deem their feline a fully-fledged member of the family, celebrating their cat’s birthday with a card or present.

And the reasoning behind why men with a cat choose the moggy over any other pet proved intriguing; nearly 12 per cent of men said since they couldn’t have a lion or a tiger, they’d have a cat as they were the next best thing.

Rachel Goodman, the creator of Hallmark’s Little Meow, said: “We conducted the report as we wanted as much insight as possible into just how much we love our feline friends; it’s clear that cats are a pet passion in the UK, and we’ve developed our new Little Meow range in response to that. We’re all about helping people connect and those connections are also with our pets, as this study demonstrates.”

Available from selected Tesco and Hallmark stores now, the cards are priced from only RRP GBP1.69 and are also be available from www.hallmark.co.uk.