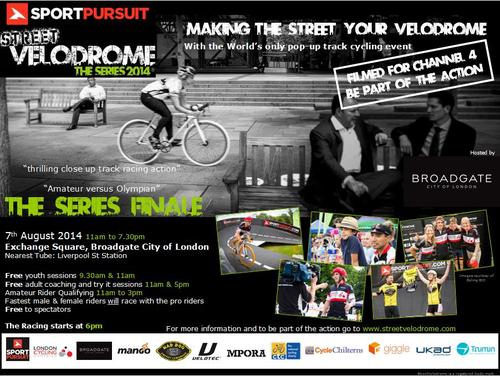 racing so far in the series has been action packed with the thrills, spills and close finishes we expected thanks to the Olympic calibre competitors

On Thursday 7th August 2014 Exchange Square Broadgate will be turned into a heart pounding theatre of cycle sport and will witness the finale of the televised SportPursuit StreetVelodrome Series.

The series is touring across the UK bringing the excitement and drama of close action track cycling to the people with the World’s only pop up velodrome.

All the events are filmed for television. The StreetVelodrome Series will be shown on Channel 4, British Eurosport and Sky Sports in the autumn in two hour long episodes.

The series will showcase the positive impact sport can have on society by providing opportunities directly in the heart of Britain’s towns and cities. Working with local authorities and other key stakeholders the series gives the local community an opportunity to engage with competitive cycle sport whether at an elite level or a complete amateur to the sport. The SportPursuit StreetVelodrome Series is the only pro/am national cycle sport competition. The series also offers complete equality with all competitors using the same standard bike and the men's and women's competitions enjoy equal billing.

The final round of the series will see the very best amateurs from the regional events invited to compete as part of the four Pro Teams who have been battling for top honours throughout the UK tour. Pro riders involved in the Finale will include Olympic gold medalist Craig Maclean MBE, Commonwealth games medalist Ross Edgar racing alongside elite rider and TV presenter Anna Glowinski (ITV The Cycle Show).

Spectators in Exchange Square Broadgate will be able to enjoy the action for free and see the top riders compete for the Series title. There will be four sets of Gold, Silver and Bronze medals to be won on the night for the best Amateur riders (male and female) and the best Pro riders (male / female). Plus the team topping the medal table at the end of the evening will be crowned the Series Champions.

StreetVelodrome Series Director Carl Thompson comments; “We are looking to bring the thrill of live track cycling to a broader audience, including those who may never have experienced cycle sport track-side before. Our ethos is to make track cycling more accessible and relevant promoting greater youth and female participation and to champion the positive social impact of sport. The Broadgate event is an ideal opportunity for us to do just that within the capital’s premier business destination. The racing so far in the series has been action packed with the thrills, spills and close finishes we expected thanks to the Olympic calibre competitors. We can’t wait to celebrate our series winners in style at Broadgate.”

The SportPursuit StreetVelodrome Series is the World’s only pop-up velodrome event. Within hours, any high street or public space is turned into a track cycling arena; offering a new level of spectator involvement and creating a completely new competition for both professional and amateur riders. The televised StreetVelodrome Series 2014 will take four teams of riders around the country for six rounds: Stevenage 8th June, Ealing 22nd June, Harewood House 6th July as part of the Tour de France Grand Departe, Stockton 13th July, Paisley 26th July and Broadgate City of London 7th August. The teams will be joined by the locally qualifying amateur riders to compete for the top slot on the series medal table at the StreetVelodrome Series Super Final in the heart of the City of London. The series will be televised in the UK by Channel 4, British Eurosport, Sky Sports and overseas in more than 180 countries. For more information on StreetVelodrome and its partners, visit www.streetvelodrome.com email media@streetvelodrome.com

About Broadgate City of London

Situated in the heart of the Square Mile, Broadgate is the Capital’s premier business destination, home to some of the world’s largest corporations and leading professional practices where over 30,000 people work each day. First developed over 20 years ago, Broadgate is an ever-evolving dynamic, vibrant environment with a mix of architecture and now including 201 Bishopsgate and The Broadgate Tower launched within the last few years. We continue to advance with the 5 Broadgate development due for completion in 2016 and The Broadgate Circle redevelopment due in 2015.

Broadgate is owned by a 50:50 joint venture between British Land and GIC.
More at www.broadgate.co.uk