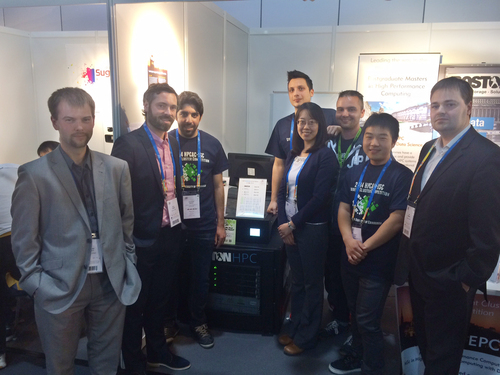 St. Albans, United Kingdom (June 27, 2014). Boston Limited, now in its 21st year as a global technology partner for Super Micro Computer (NASDAQ: SMCI), is delighted to announce that the University of Edinburgh’s entry into the ISC 2014 Student Cluster Competition, EPCC, has been awarded first place in the LINPACK test. The EPCC team harnessed Boston’s liquid cooled GPU servers to smash the 10Tflop mark for the first time – shattering the previous record of 9.27Tflops set by students at ASC14 earlier this month. The team recorded a score of 10.14Tflops producing 3.38 Tflops/kW which would achieve a rank of #4 in the Green500, a list of the most energy efficient supercomputers in the world.

This achievement was made possible thanks to the provisioning of a high performance, liquid cooled GPU cluster by Boston. The system consisted of four 1U Supermicro servers, each comprising two Intel® Xeon™ ‘Ivy Bridge’ processors and two NVIDIA® K40 Tesla GPUs, Mellanox FDR IB as well as a FDR Mellanox SwitchX-2 switch. Liquid cooling technology by CoolIT Systems was used in order to cool the CPUs and, for the first time, the GPUs; resulting in a lower overall power due to cooling optimisations across the server. The EPCC system is the world’s first public demonstration of this new technology which is the result of over a year’s research, design and engineering – something Boston is now delighted to make available to customers looking for ultimate energy efficiency and performance.

“Pairing liquid cooled GPU technology with Boston’s Supermicro-based HPC servers allowed the team to divert more power for compute and less on cooling,” said Xu Guo of the EPCC team. “The student group was able to reduce the power required for cooling by removing a number of fans from the server and allocating more of their resources to compute nodes.”

“Having participated in the event before, we knew that we had to raise the bar,” said David Power Head of HPC at Boston Limited. “We implemented liquid cooling technology in order to improve the power efficiency and performance of the NVIDIA K40s. Boston optimised the air cooling in the Supermicro servers to complement the liquid cooling technology. This is another industry first for Boston demonstrating innovation and driving efficiency in our solutions for customers.”

“Boston would like to extend its congratulations to the EPCC team and highlight our delight at being involved in such a fantastic achievement,” said Manoj Nayee, Managing Director of Boston Limited.

Boston has been at the forefront of innovative technology for over 20 years, providing cutting edge computational solutions to a range of companies relying on powerful, energy efficient HPC solutions. At this year’s International Supercomputing Conference Boston collaborated with some of the world’s leading and most influential HPC technology providers, including Intel, Mellanox, NVIDIA and Supermicro, establishing our commitment to providing customers with the most efficient server solutions on the market.

Boston Limited has been providing first-to-market technology to a diverse client base since 1992. Boston's high performance, mission-critical server, storage and workstation solutions can be tailored for every client. With expertly trained engineers and a dedicated R & D labs facility, we are able to fully customise the specification, design and branding of a solution in order to help clients solve their toughest business challenges simply and effectively. Since its founding in London, UK, Boston has expanded operations globally. Following on from the successful launch of Boston IT Solutions India in 2009, Boston launched Boston Server & Storage Solutions GmbH in Germany a year later, with offices opening on the East coast of America in 2013. For more information about Boston, please visit www.boston.co.uk and follow @BostonLimited on Twitter.