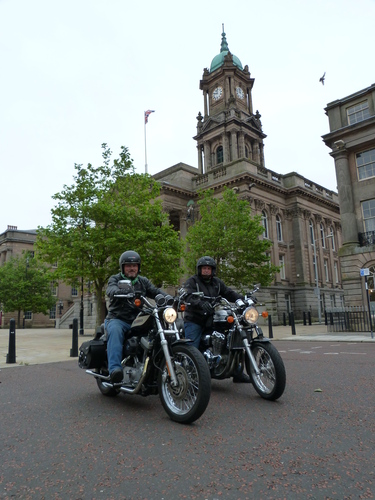 The Armed Forces service has given us so much over the years, and now we are lucky enough to be in a position to give something back to them

Two British security consultants will begin a motorcycle adventure to all 26 European Union capital cities on Friday 1 August 2014 under the name ‘Triumph over Tragedy’.

Harry Glover and Pete Bray are taking the 24,140km (15,000-mile) trek to raise funds and awareness for Armed Forces charities British Limbless Ex-Servicemen’s Association (BLESMA) and Soldiers off the Streets.

They will also be riding for the Alder Hey Children’s Charity, which provides help and support for children suffering from serious illness and injury.

As former servicemen themselves, of 4/73 Special OP Battery and 22 SAS respectively, the two fundraisers are keen to support charities that aid both active and ex-soldiers.

The two riders see the arduous expedition, where they will ride up to 600 miles per day, as the perfect opportunity to give something back to the service that has given them so much.

Harry Glover said, “The Armed Forces service has given us so much over the years, and now we are lucky enough to be in a position to give something back to them.

“The work done by BLESMA and Soldiers off the Streets has already changed countless lives, and by raising these funds we can help ensure that that work continues for a long while yet.”

Both riders have a taste for adventure, both through their years of active service and through rider Pete Bray’s record breaking kayaking exploits. In 2001 he kayaked 4,800km (2,980 miles) across the Atlantic from Newfoundland to Ireland, and in 2006 he took part in the world’s fastest circumnavigation of South Georgia.

Harry and Pete are directors of the Birkenhead-based training and security firm Primarius Ltd, which provides security to individuals and businesses, and provides training courses for the next generation of security personnel.

Upon completion of the 26 capital cities trek, the two riders will be running a close protection security course in September for people who wish to become trained as security providers.

Harry Glover said, “We spend our days providing security for others, and this is why we are taking part in this journey.

“Our work can help the charities provide security for servicemen, in a way that will protect them from the often distressing experience of returning from active service.”

Anyone wishing to sponsor Harry and Pete on their trip should contact Chris Barnes on 07834 643977 and email chris@famouspublicity.com.