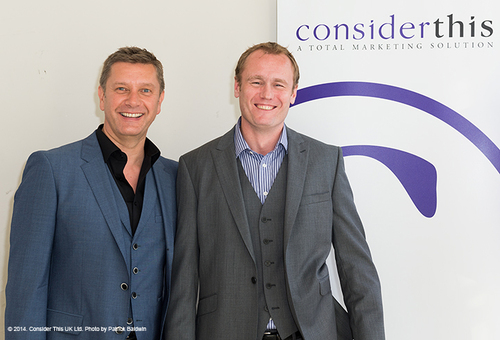 Founded in December 2003, Consider This UK was set up by Paul Taylor and his business partner Michael Pearce. After working extensively in theatre, TV and film as an actor and producer, Paul Taylor decided to retrain in arts marketing 19 years ago. Paul used his new found skills to fill in the gaps between his acting work as a freelance marketer. In 2003, he joined with Michael to work full time on his growing client base. They quickly established a loyal customer base, with clients to date including: Dance UK, Stagecoach Theatre Arts, Laine Theatre Arts, Royal Academy of Dance, British Ballet Organization, CDET, NCDT, CDS, English National Ballet,Tring Park School of Performing Arts, MOVE IT organiser Upper Street Events, Lamda, Drama Studio London, Arts Ed, BBC Worldwide, DR5 Arts Marketing, Edward Snape and The Royal Opera House.

Many of these clients who have been with Consider This UK from the start, as well as industry professionals and publications, joined them to celebrate its decade of success. Throughout the night there were live performances on stage:

• Leon Poulton and Matthew Rees, two members of the award-winning all-male BalletBoyz performed an excerpt from their current repertoire.

In January BalletBoyz won Best Independent Company at 2013's National Dance Awards, and in the spring embarked on its UK and worldwide tour with its production, the Talent.

• Husband and wife, Nicholas Maude and Ashleigh Fleming gave an exclusive surprise rendition of 'All I Ask of You' from the musical Phantom of the Opera. This marked a special occasion for the pair; Nicholas played the role of Raoul 14 years ago in the West End show, whilst his wife Ashleigh Fleming is currently in the West End cast covering the role of Christine. This was the first time the couple had ever performed the song together, beautifully bridging a 14 year gap.

Established in 1996, Jazz Dance Company was formed by performing arts school London Studio Centre. It is currently touring the UK with its show 'Circus of Dreams', culminating in a performance at the Peacock Theatre, London.

• Famed for its appearance on TV talent show The X Factor, the five-piece vocal group Tenors of Rock ended the night on a high. The band sung hits 'House of the Rising Sun', 'Sweet Prayer of Mine', 'Desperado', 'Play That Funky Music', 'Love in an Elevator' and an a capella version of 'Bed of Roses'.

All members come from a musical theatre background and so, linking to Nicholas Maude and Ashleigh Fleming’s earlier performance, covered 'Music of the Night' from Phantom of the Opera. Paul and Michael, along with Kevin Wood from First Family and Gareth Richards, the band founder, were instrumental in putting the five-piece together and are very proud of the band's achievements so far, with strong interest from a number of Vegas venues.

Paul Taylor, Managing Director at Consider This UK says "We are thrilled our clients and industry professionals were able to join us to celebrate this milestone birthday. We initially set up out of my business partner's attic offering design and print. Over the years we have grown significantly to provide a total marketing solution, including marketing strategy, brand development, website development, e-marketing, public relations and social media marketing, outdoor media and promotional goods with an incredible team of professionals. We look forward to the next ten years."

Notes to editor:
For more information on Consider This UK visit www.considerthisuk.com

This press release was distributed by ResponseSource Press Release Wire on behalf of Consider This UK in the following categories: Entertainment & Arts, Media & Marketing, for more information visit https://pressreleasewire.responsesource.com/about.