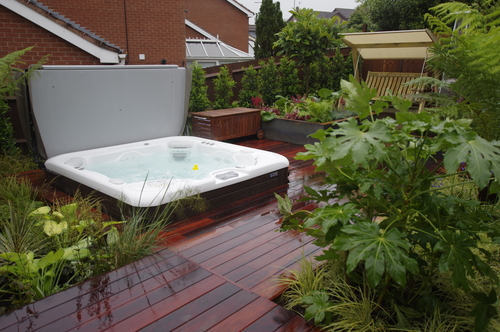 Leading hot tub and swim spa provider, HotSpring World, has spoken of its pride at being asked to donate one of its hot tubs to a police officer injured in the line of duty, who featured in the latest episode of ITV garden makeover programme ‘Love Your Garden’.

The third instalment of the show, which aired on ITV1 on Tuesday night at 8pm, saw the team transform the garden of Pete McGinn, a policeman from Burton-on-Trent.

He was awarded the prize for his bravery after being left seriously injured trying to prevent a burglar from fleeing the scene of a crime.

Mr McGinn was crushed against a lamppost by a vehicle being driven by the burglar after resisting the officer’s arrest.

The incident left him with life-changing injuries and he has had to undergo numerous operations to rebuild his left leg.

‘Love Your Garden’ awards garden makeovers to people who have endured particularly difficult times and have heart breaking and inspirational stories to tell.

After hearing of Mr McGinn’s history the show’s creators, Spun Gold TV, felt that he was a deserving recipient of a new garden and set about with a brand new design.

Central to their idea was a lush spa style garden with a hot tub as the centrepiece, although this particular feature was not revealed.

Mr McGinn had previously claimed that spas have been an effective form of treatment as he continues to recover from his injuries.

The design was also popular with his eldest daughter, who suffers from autism and is especially keen on playing in water.

It was at this point that HotSpring World was approached by the team to see if they would be willing to donate the hot tub so fundamental to their design.

They duly obliged and the HotSpring World warehouse team delivered and installed a brand new 2014 model HotSpring® Vanguard hot tub, where it was met by the company’s installation team, Hot Tub Assist.

It was installed into sunk decking designed by the ‘Love Your Garden’ team, including Alan Titchmarsh and David Domoney.

Lynda Smart of HotSpring World said: “We are big fans of ‘Love Your Garden’ and what it delivers for some of the most deserving of people, so we were naturally thrilled when they asked if we wanted to be part of such a worthy project.

“It was fantastic to see Mr McGinn so happy with his finished garden and he seemed especially delighted with his hot tub. They are known to be effective at helping with injury rehabilitation, so the fact that he now has a hot tub in his own garden is wonderful,” she added.

HotSpring World is part of the Masco Corporation of quality building and living products for the home. Over the past 30 years, HotSpring® Hot Tubs have become the UK’s number one Hot Tub choice. www.hotspringworld.co.uk products combine a number of energy-efficient features that provide extremely low operating costs. Dedicated to quality, HotSpring World leads the industry in the design, engineering and manufacturing of energy-efficient hot tubs and swim spas.