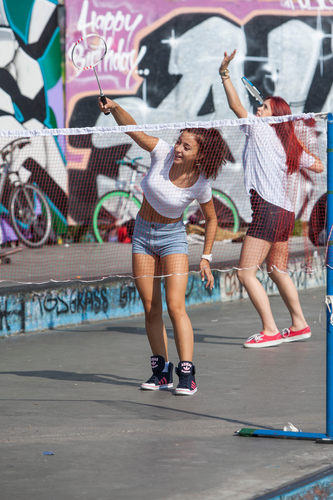 SPORT NEEDS TO CHANGE TO APPEAL TO TEENS

Sports organisations need to be brave and unconventional if they are to reach young people who don’t take part in traditional PE – says BADMINTON England. The national governing body developed its own ground breaking initiative to get young people playing badminton and has succeeded in getting tens of thousands of young people active.

The initiative – called Smash Up! – is a very fresh take on playing badminton, aimed at those 13-16 year olds who wouldn’t normally take part in sport. The branded sessions have music and playlists, no dress codes and no formal coaching. The trained ‘activators’ who deliver the sessions are not PE teachers, and the sessions are not lessons.

Over 800 schools and tens of thousands of teenagers are already involved in the scheme which launched just six months ago. Smash Up! has now been nominated for this year’s National Lottery Awards.

Julia Strong from BADMINTON England said:
“There is a need to think and do things differently if we are to help more teenagers to be active. Over 28% of children in England* are overweight, and just as importantly many young people miss out on the benefits of an active lifestyle on their mental health, confidence and happiness.

“Sports and games should be great fun but by age 12 or 13 many have been put off formal sport. We need to listen to them. We designed Smash Up! together with young people and that made a difference. We are nominated for a national award which we would love to win on behalf of the thousands of young people involved – to celebrate them for getting active and enjoying it.”

BADMINTON England is the national governing body for Badminton.

Smash Up! badminton is competing against six others to win the Best Sport category at the National Lottery Awards.Vote Smash Up!