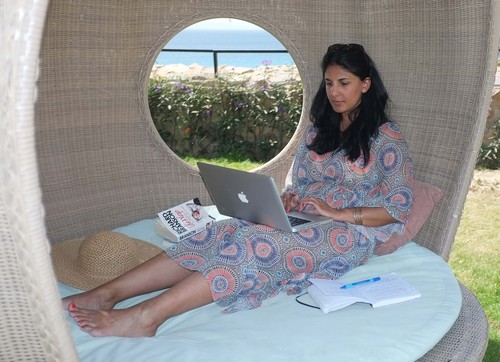 a new breed of social media savvy Brits are changing the face of the two week holiday, by turning it into a two month statuscation

It used to be the case that we’d take our fortnight’s holiday, return with a couple of blurry snaps and head back to the office with fading tans and memories - but a new breed of social media savvy Brits are changing the face of the two week holiday, by turning it into a two month statuscation

New research by small group adventure travel company The Flash Pack has revealed that 84% of Brits regularly use social media sites like Facebook, Twitter and Instagram to elongate the effects of their breaks abroad.

It’s less airport and more ‘shareport’ these days, as a whopping third (34.6%)of all travellers can’t resist uploading pictures of their airport departure board, the runway and even the view out of the plane window.

And it seems the remoter the destination the better, with people increasingly posting breathtaking pics of their fantastic holidays in more and more remote locations. The Flash Pack co-founder Lee Thompson became an overnight sensation when he posted his selfie from the top of the Christ the Redeemer statue in Rio recently. Of the research, Lee commented:

“For me holidays have always been about pushing the boundaries and experiencing something that you usually can only dream off – and so The Flash Pack was born. I saw for myself the power of social media when my Rio selfie went viral, and just because you’re no longer on that Vespa zipping through the Spanish mountains it doesn’t mean your holiday has to be over. Twitter, Facebook and Instagram are great ways to inspire others to bite the bullet and go on their own adventure trip. Long live the Statuscation ”

Nearly 65% of Brits admit they share images and updates with their friends and family whilst away. And on their return, 37% claim they keep the holiday vibe going for at least a month afterwards by connecting and friending their new found holiday companions online and then sharing pics and memories.

It is now a case of “what goes on tour, goes on Facebook”.

Top UK life coach, Fiona Harrold, commented on this phenomenon: “People have their issues with social media and the way it interrupts all aspects of our lives, but here it’s a great force for good. Why should the positive and beneficial effects of our trips abroad evaporate as soon as we touch down? This new breed of ‘statuscationers’ have found a superb, efficient and cheap way to keep that positivity going through, almost to the next holiday”

• The Flash Pack was founded by Radha Vyas and Lee Thompson. They are available to interview about what makes their travel company different.

• The Flash Pack specializes in catering for 30-40 year old adventure seekers who have money to spend but don’t want to use it on two weeks by a pool. Perfect for the solo traveller, The Flash Pack offers adventure led group tours for those who want to explore new, off-the-beaten path places and aren’t afraid of roughing it with street food and beach shacks - so long as there’s a boutique hotel with a pool bar thrown into the mix.

• Destinations The Flash Pack travels to include Uganda, Sierra Leone, Istanbul and Vietnam. Holidays can be researched via www.theflashpack.co.uk and booked on 0845 527 7647.

• The survey was conducted by The Survey Shop using Google Consumer Surveys. 1000 people aged 18-65yrs were surveyed from 9th-16th July.

• For more information please contact Rebecca Wagstaffe on 0781 8413385 or rebecca@weareco.co.uk