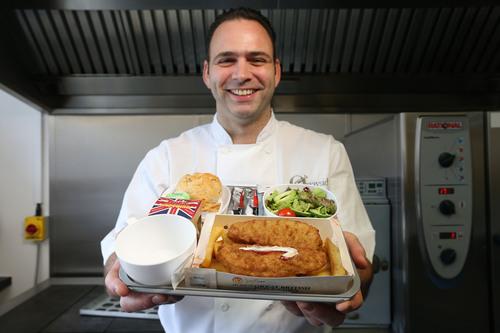 The chef/proprietor at Britain’s best fish and chip shop, Quayside, has stamped his seal of approval on British Airways’ specially created ‘Flying Fish and Chip Supper’.

Stuart Fusco, chef director of the award-winning Quayside fish and chip restaurant and takeaway, based in Whitby, North Yorkshire, has been helping boffins at the airline get a better batter at 35,000 feet for its first-ever, on-board fish and chips – launching tomorrow.

British Airways flew the UK champion fryer down to their development kitchens near Heathrow in July to give his expert opinion on their sustainable fish fillet and chunky chips, for the Yorkshire Day launch of its in-flight fish and chip supper. Quayside is famous for its homemade batter, made to a secret family recipe over more than three generations.

From today, customers on board British Airways’ longest short-haul flights from Heathrow to destinations such as Greece, Athens, Larnaca, Istanbul, Sofia and St Petersburg can now tuck into a sustainable cod fillet with a batter taste-tested by Quayside’s family run chip shop – named ‘Best in Britain’ in the National Fish and Chip Awards 2014 – as well as chunky fries with vinegar, ketchup and tartare sauce devised by the airline’s catering team.

“It’s a real honour to have been asked to taste test British Airways’ first ever fish and chip supper,” says Stuart at Quayside. “Cooking up a good batter on board presents some unique challenges but fish and chips is one of our most iconic British dishes so passengers expect it to be as good in the air as it is on the ground. British Airways has created a delicious meal to rival even the best fish and chip shops, which is very impressive at 35,000 feet.”

Sinead Ferguson, menu development manager at BA, added: “We know our customers love comfort food and expect it to be done well when they fly with us – and full flavour is crucial given that your tastes buds are reduced by more than 30 per cent at altitude.”

“We pre-fry both the fish fillet and the chips, and the length of time we do this for is fundamental to giving the chips and batter that desired crunch. During trials our fish supper was met with resounding approval by our customers – but who better to taste test this than the 2014 Fish and Chip Shop of the Year!”

• Fusco's of Whitby owns three Whitby fish and chip shops – Quayside in Pier Road, Royal Fisheries in Baxtergate, and Fish Box, in Langbourne Road.
• Over the last decade, it has picked up a raft of awards that include: ‘Independent Takeaway Fish & Chip Shop of the Year’ and ‘Marketing Innovation Award’ in National Fish and Chip Awards (NFCA) 2013/14; ‘Regional Champion North East – Independent Takeaway’ in NFCA 2012; ‘Top Fish & Chip Shop in Yorkshire’ in NFCA 2008; ‘Les Routiers Café of the Year’ 2005