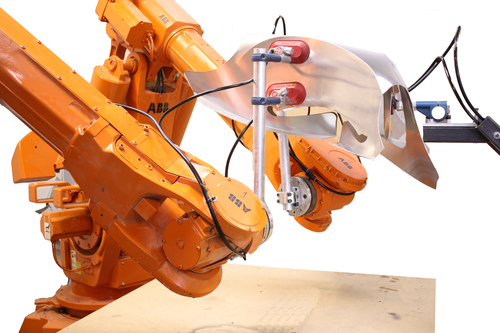 With the robotic system, we’ve really achieved the best of both worlds

London-based design consultancy RoboFold is quite literally demonstrating the art of robotic technology. The company is using two ABB IRB6400 industrial robots to help architects and designers to explore new ways of bending and forming metal, opening up new possibilities for architectural and furniture design.

Both six-axis robots are fitted with vacuum cups, which hold pre-scored metal sheets, ranging from 60-80cm2 up to 1.5m2, as they are curved and folded according to instructions supplied by RoboFold’s own robotic CAD system. The CAD program dictates the movement of the robots, which move simultaneously according to the pre-determined trajectories needed to fold the metal into the desired shape or shapes. As all of the information for the folding process is contained in the data from the CAD system, there is no need for any hard tooling.

The use of the robots is the culmination of a quest started by RoboFold proprietor, Gregory Epps, in 1997.

“I firmly believe that there are no limitations in design or in the possibilities of turning a design into a real-life object,” explains Epps.

“My interest in finding new ways to create single piece curved surfaces first started about 17 years ago. In particular, I became very interested in how to develop a system for producing curved folded metal panels. My search for ways to do this is what eventually led me to the ABB robots.”

A key benefit of using the robots is their inherent flexibility, which enables them to handle any design programmed into the CAD system.

“Before I bought the robots I had made previous attempts at developing my own machines that could bend metal along a curve. However, none of them could be readily adapted to handle different jobs,” says Epps.

By using the robots, this problem has been overcome. All information about the shape and form for the metal is contained in the CAD instructions, which direct the movement of the robot to produce the object required. Furthermore, RoboFold also has the ability to simulate the process before it has been carried out, enabling any areas for fine-tuning to be identified and rehearsed before the physical production process begins.

The ability of the robot to work directly from the CAD file has also helped to overcome another problem typically encountered in metals fabrication processes, specifically the need to produce a mold.

“As almost all of the work we do is bespoke and non-standard, it would be both impractical and uneconomical to produce a mold for every object we make,” explains Epps. “With our robotic system, the CAD file is effectively the mold, but, unlike a traditional mold, it can be readily changed and adapted whenever necessary.”

Another benefit of the robotic system is its speed. Typically, metal sheets can be formed and shaped within just two minutes. This, combined with the elimination of the need for a mold, makes it both much faster and less costly for RoboFold’s customers to see their concepts turned into reality.

“With the robotic system, we’ve really achieved the best of both worlds, coupling the accuracy, speed and capabilities of automation with the human appreciation of form and function,” says Epps. “Using the robots has opened up a world of new possibilities for the way in which metal can be shaped, with an end result that looks much better than other products formed using alternative processes.”

Started in 2008, Robofold specialises primarily in the design and architectural markets. The company has attracted attention for its work produced by the robots, which has included custom-built furniture, facades for buildings, structures for renowned architect Zaha Hadid, and, in 2012, a custom-made metal egg used as part of the world’s biggest Easter egg hunt.

“I firmly believe that robots are for working with people, not replacing them,” concludes Epps. “The future of manufacturing, especially here in the UK, cannot just be about efficiency. It should be about making useful, aesthetically pleasing things using the best tools available.”