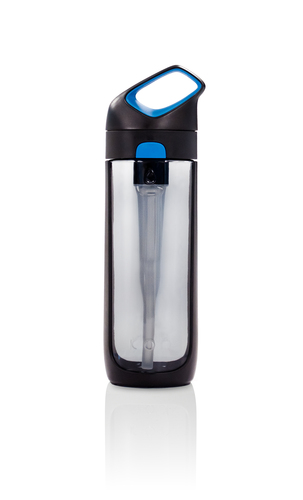 Nava is part of KOR’s Thirst for Giving Program, which donates 1% of sales to water-related charities

A bottle that transforms ordinary tap water into a delicious filtered refreshing drink is now available to UK consumers seeking an alternative to the expense and waste of traditional shop sold bottled water. Available in four attractive shades of red, white, blue and green, the KOR Nava water bottle contains its own unique replaceable coconut carbon filter that lasts three months under normal use, replaces approximately 300 disposable bottles and can save hundreds of pounds in bottled water purchases.

Already hugely popular in America, the KOR Nava has won several awards for its innovative design, including a hands-free push-button cap, which opens with a simple click, making it convenient for every day use, the gym, driving, cycling and also a night time guzzle. Even the ergonomic mouthpiece has been especially designed for optimum comfort when using and to provide natural and consistent water flow.

The attractiveness of a KOR Nava bottle will not be lost on many UK consumers looking to spend less money on their consumable water whilst also doing more to reduce waste.

KOR’s mission is to celebrate and protect water, and like all KOR Water products, Nava is part of KOR’s Thirst for Giving Program, which donates 1% of sales to water-related charities and raise awareness for ocean protection, container recycling, watershed protection, and the global water crisis.

Nava’s filter is made from coconut shells, widely recognised as the most effective material for carbon filtration. After harvesting, the shells are processed using a proprietary method that minimises greenhouse gas emissions. Unlike coal, which takes millions of years to form and may contain heavy metals, coconut is a renewable and health-safe resource.

Nava’s ergonomic mouthpiece resulted from over a dozen prototypes and Nava's filter and filter housing were carefully designed to make drinking feel natural. Unlike other bottles, drinking from Nava doesn't require squeezing, sucking or biting. Users sip naturally as they would from a straw.

Unlike most bottles, which force users to put their lips on an exposed surface, Nava's cap completely protects the mouthpiece when not in use.

KOR Nava water bottle is distributed in the UK exclusively by GSR Distribution and is available to buy online at www.korwater.co.uk