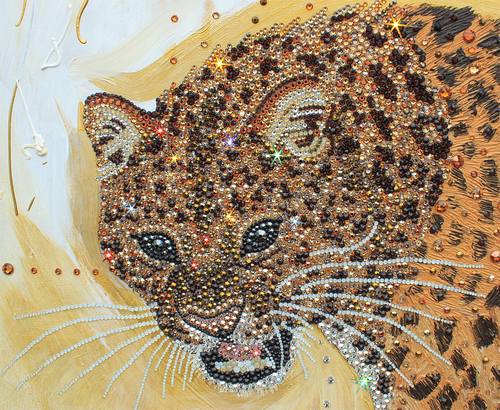 Contemporary artist Claire Milner, famed for her portrait of Marilyn Monroe made with 65,000 Swarovski crystals which was purchased by musical megastar Rihanna, has just completed her latest collection of crystal-encrusted paintings which are available through the Rebecca Hossack Gallery in London.

The powerful paintings focus on the plight of some of the world’s most vulnerable species and at first glance represent beautiful images of animals, yet upon closer inspection each work shows a much darker subtext of the consequences of poaching, climate change and habitat loss on endangered animals.

The collection is all about contrasts, both literal and metaphorical: The singular animals represent the last of the species and are made up of thousands of Swarovski crystals. The technical precision of the crystal mosaic faces contrast with the ominous painted backgrounds.

The references to classical literature are written in graffiti, and messages in the dead language of Latin are a symbolic warning that we must act now to save these creatures.

Each painting includes a handprint, which simultaneously symbolises the birth of art and the destruction of the planet.

Claire’s work has already achieved a significant amount of attention from both UK and international sources, and this latest progression is an important progression for the artist.

Claire said, “This is a subject that is very close to my heart. The collection has involved hundreds of hours of emotionally draining research, as well as the individual application of tens of thousands of crystals, so to see the paintings finally finished and getting such a positive response is fabulous.”

Each of the seven animals is a flagship species and illustrates Claire’s goal of raising awareness through her latest artworks of the intolerable rate at which animal species are becoming extinct at the hands of man.

The new works include a breath-taking Amur Leopard, inspired by Dante’s Divine Comedy and an allegory for the greed of man. The graffitied text is written in the shape of a number 30, signifying the approximate numbers of these creatures left in the wild. Also in the collection are an African Elephant and the giant head ofan endangered tiger, complete with snare, which are encrusted with a staggering 17,000 and 32,000 crystals respectively.

A compelling portrait of a gorilla was inspired by Milton’s ‘Paradise Lost’ and created with 7,000 crystals. A panda, one of the most powerful symbols of species conservation in the world and created with 9,000 crystals, serves as an allegorical warning that mankind destroys the environment at his own peril.

Making up the collection are a 9,000-crystal portrait of a polar bear standing on a shrinking iceberg with the graffitied Latin message “who is silent gives consent”, and a rhinoceros symbolising the precariousness of man’s existence in relation to the abuse of the natural world.

These captivating images, which draw on an ancient art form and were created with Claire’s cutting-edge crystal alchemy, ensure that the viewer can return to the works again and again and discover something new each time.

The artworks are available for sale via the Rebecca Hossack Art Gallery in London.

Imagery available upon request. For more information contact Claire A Milner on 07512 192386 and email clarry@claire-milner.co.uk.

Claire Milner has travelled extensively throughout her life finding inspiration for her work through her trips to places such as Africa, Asia and South America. She has previously created artworks for Camfed, a charity which helps to fight poverty in Africa by educating and empowering girls. Her passion for animal welfare gave her the incentive to begin her recent endangered animal collection.

Claire has a background as a graphic designer and illustrator, and her commissions in this capacity include portraits of former Prime Minister Gordon Brown and former Chancellor Nigel Lawson as well as many other politicians and company CEOs. She subsequently researched portraiture in ancient mosaics which has evolved into her current specialisation featuring crystal mosaics made with SWAROVSKI ® ELEMENTS. She has developed her skill using crystals in a contemporary way to create stunning portraits that have universal appeal and have featured in Swarovski Elements Magazine.

Since deciding to concentrate solely on her career as a contemporary artist, Claire’s work has received wide acclaim and has been published in over 20 countries. Her artworks are held in private collections around the world and her portrait of Marilyn for Rihanna is featured on the official website of the Estate of Marilyn Monroe. In 2013 her work was chosen for five separate featured collections with Saatchi Art, and her portrait of Amy Winehouse appeared in an exhibition curated by the Amy Winehouse Foundation to mark what would have been the late singer’s 30th birthday.

Earlier this year Claire’s work was exhibited at AAF Hong Kong and Singapore with the Rebecca Hossack Gallery.