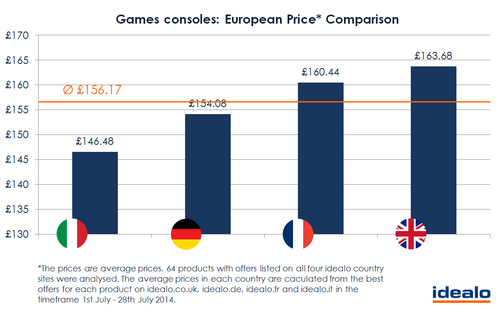 Price comparison site, idealo, has analysed which countries offer the lowest prices for tech products in order to investigate the savings consumers can benefit from by taking advantage of cross-border e-commerce.

The best offers on identical products were compared on idealo's international sites in the UK, Germany, France and Italy. Significant price differences reveal that UK shoppers are often paying more than their European counterparts.

The results of the price analysis of 6 different tech products across Europe show that in four out of six cases, the prices from UK retailers exceed those of their European competitors.

Despite the UK's status as European e-commerce leader, the study showed that consumers in Germany more often benefit from lower prices on items such as external hard drives, speakers and smartphones, whereas it is Italian online shoppers who pay less for LCD TVs and games consoles.

Although British consumers are better off than their Italian and French counterparts when it comes to prices of Blu-ray players, they would be wise to head to European retailers for many other products.

Thanks to encouragement from the recent EU-wide standardisation of distance-selling regulations, provided that European retailers offer international delivery at a fair cost, UK consumers could save money by shopping further afield for tech items in the future.

The full study, including in-depth price analysis and graphs can be found on the idealo blog

idealo compares the prices from more than 22,000 online shops and brings you all the latest information on product features, shops and availability. iOS and Android apps enables shoppers to easily check prices on the go.