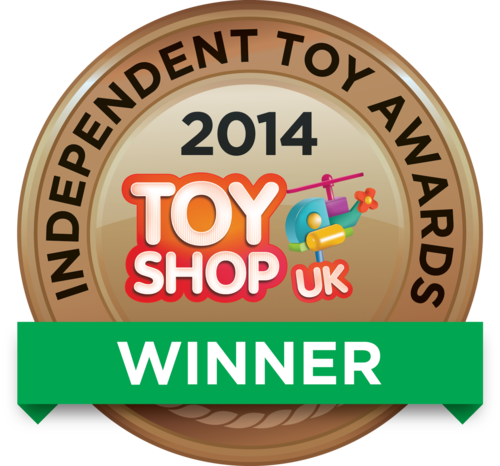 Embarrassing new party game, Accentuate, has scooped an award voted for by 1000+ independent toy retailers. The game, created and launched earlier this year by Merseyside siblings, Graeme and Fiona Fraser-Bell, has been awarded Bronze in the card game category of the Independent Toy Awards 2014. The awards, which are operated by online toy directory, ToyShopUK, are the only ones voted for by the nation’s independent toy retailers.

“We are beyond thrilled,” comments Graeme Fraser-Bell, inventor of Accentuate. “The game’s only been on shelves for a couple of months and already independent retailers are picking it as one of their favourite products. We know it’s a great game, but to have this reinforced by the very people who sell such games is a very valuable endorsement and we are honoured to receive such a prestigious award.”

Aimed at players aged 16+, Accentuate is the must-have gift for grown-ups this Christmas and one of the most exciting new-kids-on-the-block in the growing ‘Games for Badults’ sector. It boasts a simple yet humiliating premise: repeat a given quotation aloud in a randomly selected accent and see if teammates can guess what it is! The worse the accent attempts are, the more hilarious the game becomes as players struggle to separate their Geordie from their German, their Scouse from their Spanish. Featuring 30 different drawls from around the globe – a third of which are home-grown British accents – Accentuate players are under blush-inducing pressure to perform, with just thirty seconds to utter one of the 90 quotations in their allotted accent.

The distinctive black and white Accentuate box comes complete with 90 Accent Cards featuring 30 different accents from around the globe (each repeated three times), 90 different Quotation Cards, a timer and a dice to select game-play options. Its compact size makes it ideal for livening up festive visits to family and friends this Christmas.

Accentuate, RRP £19.99 is for four or more players aged 16+. It’s available to buy now from www.firebox.com and www.accentuategames.com

About ToyShopUK
Toy Shop UK is a consumer-led, online directory that helps toy suppliers, retailers and licence holders promote their businesses to an audience of up to 10,000 unique visitors per day.

Popular weekly giveaways, the esteemed Independent Toy Awards and special supplier listings are just three of the ways that Toy Shop UK helps companies increase their online presence and complement their other marketing activities this year.

Run by online toy directory, Toy Shop UK, the Independent Toy Awards are unique within the industry, thanks to being the only ones voted for by the nation’s independent toy retailers.