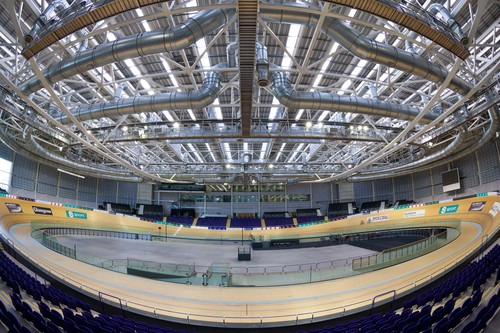 The principal strength of the roof structure is derived from two pairs of unusual primary trusses.

The Chris Hoy Velodrome in Glasgow is one of the biggest sport facilities of its type in Europe and was most recently used for the Commonwealth Games. Barnshaws Metal Bending, the World’s largest steel bending company worked alongside Severfield, the UK’s premier structural steel company, on the vital elements of the roof construction for this prestigious project.

The principal strength of the roof structure is derived from two pairs of unusual primary trusses. Each is formed from a 10m wide x 3.4m deep x 93m long fully braced box girder. The tendons, incorporated into the lower half of the trusses were curved by Barnshaws from 23m long, 9 tonne I-sections.

Severfield, Lostock had to identify a strategy which enabled each of the primary trusses, with their curved tendons, to be delivered to site in transportable lengths. These trusses needed to be quickly assembled, erected and be immediately self-supporting for their temporary loadings over the 93m span.

In order to achieve this, Severfield, Lostock developed a bespoke bolted connection at all four connections of the curved tendons to the Box Truss. These bolted details resisted any tension in the tendons after their initial installation, and provided access for the salient connections to then be fully welded.

The four main box girders were assembled into two halves on site, whilst being supported on stillage’s.

The curved tendons were delivered to site in eight sections which were carefully constructed beneath the Box Girders. The tendons were then welded into 77m-long lengths.

Once the curved tendons had been welded and their temporary bolted connections made, the two box girder halves were lifted into their final position and joined at mid-span with “flying” bolted splices. Two 400t capacity crawler cranes, each rigged with 120t of superlift, enabled this to be achieved. The trusses were then released from the cranes.

Once released from the crane, the four bolted tendon connections were fully welded. Only on completion of these final welded details were they sufficiently robust to resist their permanent loadings during the life of the structure.

The two primary trusses and their supporting columns, which are located at third points within the structure, were the first roof steelwork sections to be erected. Once in place, they allowed the secondary trusses to be installed along with the remainder of the main frame.

The trusses and all of the roof steelwork are fully exposed within the arena. This adds an attractive, aesthetic element.

Notes for Editors: With five manufacturing sites in the UK, Barnshaws Metal Bending has the greatest capacity range in the world. Established in 1969, the company has grown to be a key supplier to the construction, architecture, oil and gas, mining, transport, engineering and other sectors.