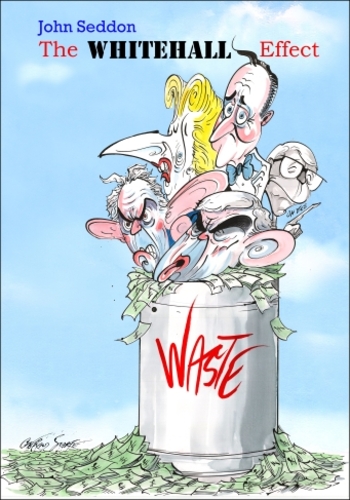 “Politicians don’t know much about management…”

When they come to write the history of our times, one of the great mysteries will be: how was it that for 35 years successive governments legislated, regulated and interfered in the public sector and consistently made things worse?
Targets, standards, inspection, regulation, outsourcing, shared services, back offices, call centres, IT ‘solutions’, ‘choice’, ‘nudge’, ‘lean’ – the public sector has been plagued with dogma and other nonsense (The Whitehall Effect) that just makes things worse.

Wringing car-factory economies out of people

You may recognise the language. John Seddon – scourge of command-and-control thinking in all its forms – is back. This time with an uncompromising account of the effect of Whitehall’s dead hand on public services. It’s a damning read.

In The Whitehall Effect he explains how successive governments have failed to deliver what our public services need and exposes the devastation that three decades of political fads, fashions and bad theory have caused. With detailed examples, he shows how the Whitehall ideas machine has failed on a monumental scale – and the toll it’s taken on public sector workers and all of us who use public services.

Seddon’s target is the ‘industrialisation’ of public services – the attempt to wring car-factory ‘economies of scale’ out of public sector workers: social workers, benefits staff, cleaners, tradesmen, doctors, teachers and every other group of public servants – and the disastrous effect it’s had on costs, service, morale and the citizens who use these services.

Purpose not method
Finally Seddon offers a better alternative to the alienating and unresponsive experience of industrialised public services. Good services, attuned and sensitive to people’s needs, designed to meet citizens’ demand not Whitehall’s targets, will drive down failure demand, save money and improve all our lives.

About the author
John Seddon is a respected and outspoken management thinker and commentator. Trained as an occupational psychologist, he is well known as a speaker and author, and is an international authority on both public and private sector service organisations.

He has appeared on the 'Today' programme, 'In Business' with Peter Day and 'The Moral Maze' among others. He is available for interview on anything covered in the book.