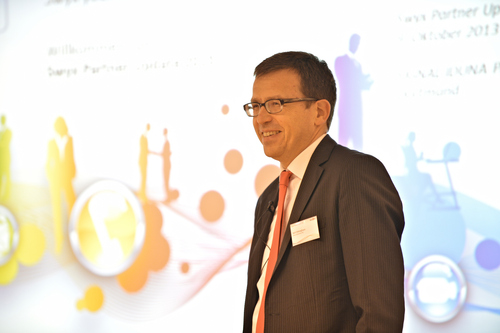 Supporting new platforms and devices, such as the use of UC features on tablets and also on Apple OS X, enables us to tap into new target markets

London – 14th October 2014 - With SwyxWare 2015, the Dortmund-based "unified communications" (UC) manufacturer Swyx solutions AG is introducing solutions for today’s modern workplace with a newly developed app for mobile IOS and Android powered devices as well as support for other smartphones and tablets for enterprise-wide communication. Also available with SwyxWare 2015 for the existing SwyxIt! Desktop client are new features and enhancements such as an alternative, touch-optimized user interface for Windows ® 8 environments and new options for secure connections outside of the corporate network, without the need for a VPN (Virtual Private Network). SwyxWare 2015 is now available as a download.

The latest version of SwyxWare addresses the growing demands of users for mobile unified communications both in and out of the office, providing the foundation for a seamless integration between mobile workers and other staff regardless of their location. The completely re-designed mobile app for IOS and Android operating systems supports Adaptive User Interface technology that automatically shows different screen displays for both smartphones and tablets.

What especially distinguishes the new app, is the ability to make and receive telephone calls over 4G, 3G or Wi Fi data connections. Conversations can be held with other Swyx users on the same network from any location without additional costs. Users will also have the ability to see mobile presence and status information for all corporate contacts. Both the new app and also the new desktop version for Apple OS X will be available to download from app stores by the turn of the year.

"The development and redesign of our Swyx clients in the 2015 version reflect the increasing requirements and demands of our customers for agility and flexibility in today’s modern workplace", says Swyx CEO Dr. Ralf Ebbinghaus. "Supporting new platforms and devices, such as the use of UC features on tablets and also on Apple OS X, enables us to tap into new target markets for our solution."

The Swyx RemoteConnector, another feature of the SwyxWare 2015 desktop client, even allows the user to establish secure, encrypted connections without a VPN. This gives more flexibility and simplifies the network infrastructure at both the server and user end.

SwyxCTI + is now even easier

With SwyxCTI you can turn any phone into a smart device. The popularity of this feature, which already existed in the previous version, has seen further improvements in the latest release. With SwyxWare 2015 the interaction and the control with the SwyxIt! Desktop client becomes even easier and faster. In particular, the call set-up with mobile IP-DECT devices can now be started from a PC or laptop instantly, without any delays. A further highlight of the new SwyxWare version is the alternative, touch-optimized user interface for Windows ® 8 clients. Thanks to its flat design, the application integrates seamlessly into existing Windows® 8 interfaces, both from a visual and functional perspective.

Swyx operates as a pan-European market leader via two-tier distribution and over 1,000 authorised resellers: the Dortmund based company with dedicated offices in the UK and France sells not only software solutions in six languages, but also has a range of suitable phones and other hardware devices in its product portfolio. Swyx’s award-winning unified communications provides not only in-house (CPE) solutions, but also cloud-based variants with well-known partners: Europe already has 500,000 users that rely on Swyx, of which around 10 percent have chosen to use a cloud-based solution. The company currently employs more than 100 staff who are responsible for continually improving the SwyxWare solution for the communication requirements of today and in the future. For further information, see www.swyx.com.