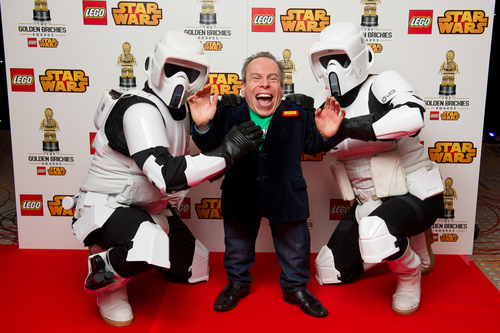 Warwick Davis who began his career as an Ewok in Return of the Jedi, hosted an exclusive LEGO® Star Wars™ awards ceremony just for fans affectionately dubbed: ‘The Golden Brickies!’.

‘The Golden Brickies’ which is the first time LEGO® has ever held its own awards ceremony in the UK, launched last month via its Facebook page. In homage to the legendary movie franchise and upcoming Episode VII, LEGO invited families across the UK to take part in the epic challenge to discover the next generation of talent including wannabee film makers and photographers.

Using only LEGO Star Wars™ pieces to showcase their skills, hundreds of budding Jedi builders from across the UK entered the competition. Finalists were chosen by the specially selected expert judging panel, searching for the best fan created content. Winners were treated to an exclusive red carpet event with Warwick Davis at the LEGOLAND® Windsor Resort Hotel.

Davis said: “I am so thrilled and honoured to be a part of this epic LEGO Star Wars event, showcasing the next generation of film makers, LEGO builders and photographers! The enthusiasm and pure talent on display today from LEGO Star Wars fans both young and old, is truly inspiring. Meeting all the fans of the LEGO Star Wars universe, you can literally feel the excitement building ready for next year’s movie release. Congratulations to all the winners of the Golden Brickies 2014!”

Many fans came to the event dressed in full Star Wars costume, with little Ewoks, Chewbaccas and mini Princess Leias - the red carpet was a sea of Jedi spectators!
Winning entrants got the chance to meet the Return of the Jedi actor and host Warwick , as well as some of the key people behind the LEGO Star Wars™ universe.
Categories included best picture, best mini movie, best set build and overall LEGO Star Wars™ winner for best content creation. Each of the finalists walked away with their very own bespoke LEGO C-3PO award!

Not only that but winners were commended with a years’ supply of LEGO Star Wars™ sets, with entry into LEGOLAND® Windsor Resort afterwards to enjoy the Resort’s 55 rides, shows and attractions, including the Star Wars™ miniland.

Overall winner, Daniel Jamieson, age 24 from London commented: “I can’t believe I have won a Golden Brickies award! I have never won anything like this before and I am really excited to even be considered. This really is a once in a lifetime prize and I can’t wait to get building the year’s supply of LEGO Star Wars sets!”

LEGO spokesperson Emma Owen commented: “The force is definitely strong with the UK’s LEGO Star Wars fans! The reaction to this talent contest has been overwhelming and the fan creations are just astounding. The creativity expressed in the hundreds of entries truly highlights the power of imagination when using LEGO bricks.”

LEGO and the LEGO logo are trademarks of the LEGO Group ©2014 The LEGO Group
© 2014 Lucasfilm Ltd. LLC & TM. All rights reserved.

Interesting fact – Warwick Davis is the celebrity with the most LEGO Minifigure characters immortalised from his film characters. The four characters and minifigures include: Star Wars – Wicket & Wald and Harry Potter – Goblin Bank Teller & Professor Flitwick.