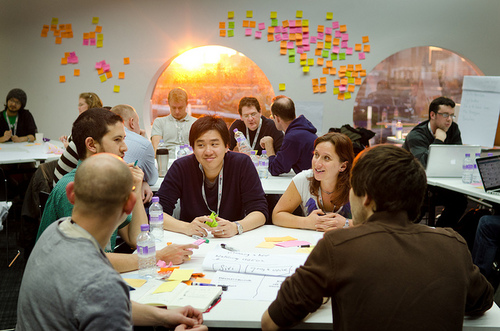 1,600 experts, educators, and hackers are set to descend on London to shape the future of the web at the annual Mozilla Festival
Now in its 5th year, the festival is like the web itself: a fun, frenetic bastion of creative collaboration
Another 2 to 4 billion people are going to come online in the next decade. Is their web going to be open or closed? Decentralized or controlled? Will they be passive consumers or empowered creators? MozFest participants tackle these challenges not just by talking about them, but by building new ways to teach and engage everyone in making the web together.
Tracks will include sprints on how to shape the new Internet of Things, spread digital literacy around the globe, and ramp up activism around post-Snowden threats to our online privacy and security.
The event takes place between October 24 and October 26, 2014 at Ravensbourne, East London

LONDON, October 2014 -- The Mozilla Festival, or ‘MozFest’, one of the largest tech celebrations of the Open Web, is returning to London this month.

MozFest, now in its fifth year, is the UK’s leading alternative tech event dedicated to building a free, open and more democratic internet. Between 24 to 26 October, 2014, MozFest will open its doors to nearly 1,600 experts, inventors, teachers, hackers, students journalists, and web enthusiasts from nearly 50 countries around the world.

“Mozilla works to keep the democratic principles of the internet alive: to mobilise a global community that understands how to make -- not just consume -- the web and are empowered to share that knowledge with the world,” said Mark Surman, Executive Director of the Mozilla Foundation. “MozFest is where we rally each year to share ideas, build new projects, and change the web.”

“There's always great energy and excitement when groups of young coders get together. MozFest has its own very unique buzz which enables some great creative thinking and collaboration. Mozilla plays a huge role in supporting the democratisation of technology all over the world, enabling anyone to participate regardless of age, location or socio-economic background. Empowering people to actively engage with technology is already delivering great results, we've seen great projects come out of MozFest and can't wait to see what will be achieved this year,” said Moloney.

“Another two billion people will come online over the next 10 years. What will their web look like? Will they be creators of the web or will they be merely consumers? That’s what MozFest is for: to empower us all to create the web we want and make sure the open web wins,” added Surman.

Interactive sessions at this year’s festival include a continuation of Mozilla’s highly successful global Maker Party, which taught more than 125,000 people how to build the web through hands-on learning this summer. MozFest’s iteration will have introductory, hands-on sessions for people new to making the web, as well as specialized tracks for teachers looking to learn how to teach the new computing curriculum through hacks, discussions and physical learning.
MozFest will run for three days at Ravensbourne, a media campus located in East London next to the O2 Arena.
Friday, 24 October - MozFest officially opens with a Science Fair that highlights a range of interesting people and projects from across the web.
Saturday, 25 and 26 October - interactive sessions, hacking and presentations. The event culminates with a closing demo party on Sunday showcasing what was made during the festival.

More details on MozFest:
MozFest is the Mozilla Foundation’s signature annual event and is the embodiment of its mission of promoting openness, innovation and opportunity on the web.

Mozilla’s community shares these goals and attends MozFest so that they can create things from scratch, feel empowered by a community with shared values, and use their skills to teach the web to others.

MozFest:
serves Mozilla’s mission of protecting the open web by creating an inclusive and creative atmosphere where the open web community can collaborate on new ideas;
is a prime example of Mozilla’s dedication to teaching web literacy around the world via its scaleable train-the-trainer model;
showcases how Mozilla is encouraging the billions of new users coming online through affordable mobile devices to become creators of the web.
More than 3,300 people from 51 countries have collaborated at MozFest over the years. It’s the one time each year when the most hard-core and influential members of the Mozilla community come together to shape the future of the Web.

Now, in its fifth year, the 2014 MozFest will showcase and develop best practices for community leadership, and will emphasise innovation in building a Web that works for everyone.

What’s being covered: The full itinerary and speaker list will be released shortly. Key themes for this year include:
The mobile web
Teaching the web and open badges
Policy & advocacy
The Internet of Things
N.B. Mozilla will also be making several program announcements.


Sessions include:
How the next 1 billion internet users will bring their online ideas to life
Helping 10 million young people become digitally literate
Design your first mobile app
Hacking the gender gap
Using badges to support the delivery of the new computing curriculum
User privacy and security on the web
Let’s build an unbreakable internet
I was born with the web – 25 under 25
How to get into the correct amount of trouble online.