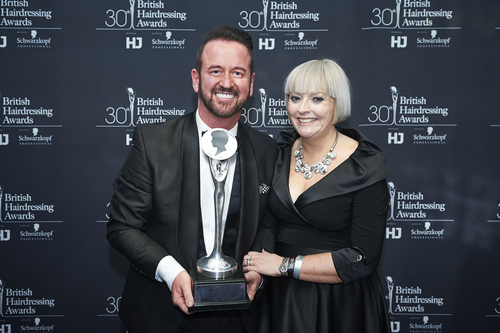 Tonight the winners of HJ’s 30th British Hairdressing Awards, sponsored by Schwarzkopf Professional, were announced in style. Set in the luxurious Great Room of the Grosvenor House Hotel a JW Marriot Hotel in London’s Park Lane, the brightest event in the hairdressing calendar was a night not to be missed. For one hairdresser in particular, it was a defining moment in their professional career when their name, Mark Leeson was announced as the British Hairdresser of the Year 2014.

Presented by Executive Director of Hairdressers Journal International, Jayne Lewis-Orr and much loved television personality, James Corden, the black-tie awards ceremony brings together the hairdressing industry to celebrate the best of British creativity. Each year professionals from all over the UK showcase their skills and love for their craft in photographic entries. There are nine regional categories covering all areas of the UK and six specialist categories that recognise the skills required in specific disciplines. These include Afro, Artistic Team, Avant Garde, Newcomer, Men’s Hairdresser of the Year and the Schwarzkopf Professional British Colour Technician of the Year. Hairdressers from any UK salon can enter the British Hairdressing Awards and compete evenly with the biggest names in the industry as the anonymous, independent and audited judging process ensures complete fairness for all.

Along with the 30 year heritage, what makes the British Hairdressing Awards unique is that they are based purely on photographic entries that demonstrate the skills and talents of the entrant. All entries are judged by an extensive, distinguished and experienced panel of credible individuals and the results collated by an independent firm of auditors.

“British hairdressers are internationally renowned for their creativity, originality and innovation and we are proud that the British Hairdressing Awards continues to celebrate the best of British,” said Executive Director, Jayne Lewis-Orr. “It has been inspiring on this special anniversary to see the standard of entries in all categories pushing forward. Congratulations to all the 2014 winners who truly are the best of British.”

The winners of the 2014 British Hairdressing Awards