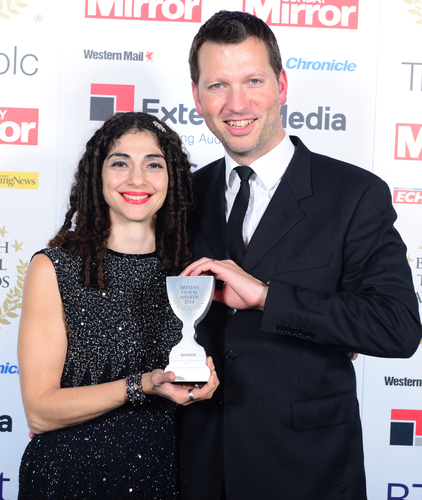 We’re delighted to win this award in the face of some very tough competition, and hope it’s the first of many to come

The award tops an eventful year during which the title has successfully transitioned to 10 issues a year, launched a new website in July, and is on the cusp of introducing its new interactive app. All this further cements its position as a leading title in the consumer travel market. The 180-page magazine celebrates compelling storytelling featuring award-winning writers, you-are-there-photography and inspiring narratives.

Pat Riddell, editor, said: “We’re delighted to win this award in the face of some very tough competition, and hope it’s the first of many to come. It’s been a very busy, successful year for the magazine and receiving acknowledgement is a huge boost.”

Maria Pieri, editorial director, said: “Big thanks to all those who voted for National Geographic Traveller and congratulations to our creative, passionate and hardworking team. We are proud to receive this award because it recognises this incredibly talented team who are producing such engaging content across all mediums. And to know we have won based on the consumer vote – that makes this win even more special.”

British Travel Awards’ chief executive Lorraine Barnes Burton said: “The British Travel Awards are the only travel industry accolades voted for exclusively by the travelling public. During the voting period, which ended on 30 September, more than one million consumer votes were cast making the BTAs the largest Award programme in the UK. The Awards serve to recognise all that is great about UK travel companies and the British Travel Awards symbol is recognised as the ‘Benchmark of Excellence’. To win a British Travel Award is truly an accolade and National Geographic Traveller is to be congratulated as a winner.”

• Pat Riddell was also shortlisted for the Editor of the Year, Lifestyle in the British Society of Magazine Editors (BSME) Awards 2014.

• And finally, National Geographic Traveller has been shortlisted for two Professional Publishers Association (PPA) Independent Publisher Awards: Designer of the Year (Chris Hudson) and Cover of the Year.