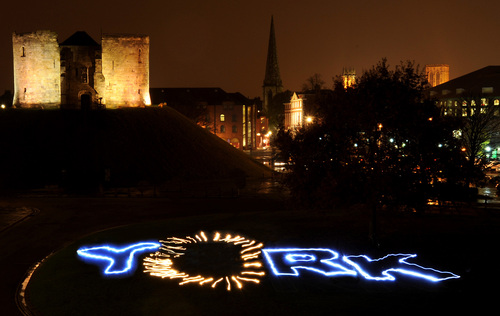 Media Arts encourages people to share, communicate and experience art in new ways – it’s a thread that connects people, not just on a local but global scale.

The city of York is today celebrating receiving one of the world’s most sought-after accolades, welcoming the news that UNESCO has designated York a City of Media Arts.

“This clearly flies the flag for York’s bid to be the first port of call for media arts in the UK, and indeed, one of the most creative cities in the world. This designation recognises all of the people involved in York’s vibrant digital arts scene: computer games designers, digital archivists, film producers, light artists, online publishers and many people who play a supporting role,” comments Kersten England, chief executive of City of York Council, which supported the application.

With an emphasis on ensuring everybody in the city benefits from the ‘UNESCO City of Media Arts’ designation, York is now putting into action an ambitious and inclusive 2015-16 Plan to encourage even more participation and enjoyment of the arts in many different forms. Major projects include an international programme of cultural festivals showcasing Media Arts and advancement of plans to build a new Digital & Media Arts Centre in the city’s historic Guildhall, blending creative invention, participation and industry.

Cllr Alexander, leader of City of York Council said: “This prestigious recognition of York’s creative and media sectors will boost these existing strong industries in York, raise the profile of the city globally, attract new businesses and provide employment opportunities for York residents for years to come”.

York is already a leading destination for creative and digital businesses: it is the largest growth area of the city’s economy, benefiting from significant investment in supporting infrastructure in recent years, including the £20 million Ron Cooke Hub for creative enterprise and the new £30 million Heslington Studios at the University of York. This attracts both extraordinary entrepreneurs and outstanding talent, helping to create the thriving cultural scene for which it is famed. Charles Cecil MBE, founder of Revolution Software which is based in the city centre, believes these inherent skills and facilities in York are complemented by one unique factor: “Media Arts encourages people to share, communicate and experience art in new ways – it’s a thread that connects people, not just on a local but global scale.”

He continues, “York is becoming a media arts hub because it is an ideal international meeting point for ideas and creativity. The city is an exceptional and inspiring place to live and work, embracing its past whilst also celebrating the present, making it the best possible environment to foster and develop creativity and stimulate the imagination. You can walk through 1000 years of history on the streets of York, but still take advantage of the city’s rapid rail networks, meeting people in London or Edinburgh within two hours. ”

York joins Gwangju (Republic of Korea), Linz (Austria), Dakar (Senegal) and Tel Aviv-Yafo (Israel) as newly designated cities of Media Arts, with Lyon and Enghien-les-Bains in France, and Sapporo in Japan having already received the honour. To achieve the status, cities have to demonstrate development of cultural and creative industries triggered by digital technology, successful media arts integration into urban life, and wider access to culture through digital technology development.

“We are delighted to welcome the city of York into the UNESCO family in the UK and that it will join the prestigious global network of UNESCO Cities of Media Arts, the UK’s first,” said Tim Williams, Chair UK National Commission for UNESCO.

“York has already achieved an international reputation for its media arts based upon the efforts of a number of individuals and ground-breaking companies working on their own. The bid has encouraged collaboration on a scale we haven’t seen before, and the potential of this tighter network of professionals is huge. York is well on its way to becoming the country’s first ‘gigabit’ city, with superfast network connections making it easier than ever before for people to both work in the digital arts sector, and also for citizens to engage with this new art form, whether by experiencing projections on the sides of buildings, or using their own mobile technology to access other interactive arts” says Mat Lazenby of creative agency, LazenbyBrown.

The permanent designation secures York’s entry into the Creative Cities Network, creating new exchanges with 68 other leading creative cities across the world and new opportunities for its practitioners and researchers on an international scale. York’s involvement in the network will be co-ordinated by the city’s new marketing and business development partnership, Make It York.

Main photograph shows: A group of 25 volunteers from York’s media arts sector gather at the Eye of York to mark the UNESCO Media City of Arts designation, writing the word ‘York’ using torches and the ‘light graffiti’ technique, where a long camera exposure allows lines to be drawn in light.

Other photographs of media arts project that supported the bid are available for free download from the online pressroom: http://news.cision.com/york-unesco-city-of-media-arts