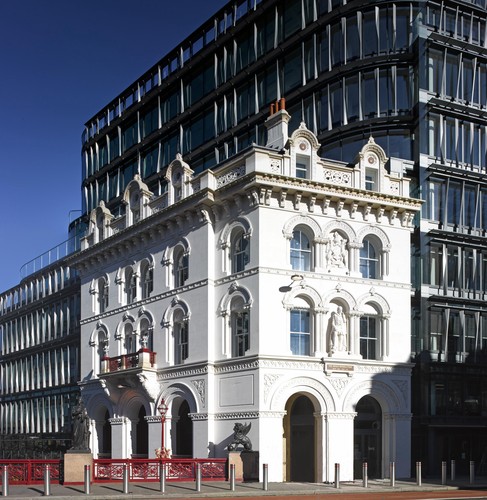 All the Portland Limestone stonework was executed by Stirling Stone Limited who are celebrating their 25th anniversary in style by winning the ‘New Build Traditional Style Stonemasonry’ and ‘Craftsmanship’ Stone Federation Awards.

60 London has won the Stone Federation of Great Britain Awards in recognition of the exemplary traditional stonemasonry of the facades which display a feast of elaborate decorative mouldings and specialist carvings including huge Greek Gods and a full size hand carved statue of Sir Hugh Myddleton.

All the Portland Limestone stonework was executed by Stirling Stone Limited who are celebrating their 25th anniversary in style by winning the ‘New Build Traditional Style Stonemasonry’ and ‘Craftsmanship’ Stone Federation Awards. The highest possible accolade from their own industry’s national federation.

60 London was recognised by the judges for the meticulous effort undertaken by Stirling Stone in achieving the highest standard of craftsmanship exhibited on the completed building.

The new building completes the set of four, one on each corner, to re-establish the original symmetry of the four buildings which historically stood at the intersection of Farringdon Street and Holborn Viaduct to mark the entrance to the City of London. This is the first time since the Second World War that all four corners have been complete as two of the buildings were destroyed during the war. Stirling Stone also reinstated Atlantic House, opposite 60 London, ten years ago so they have played a major role in returning Holborn Viaduct to its former glory and prominence as a London landmark.

Many traditional skills were employed to achieve the outstanding quality of the stonemasonry and ensure that the new building is true to the original design concept. Stirling Stone first took hundreds of rubbings from mouldings on the existing buildings which still stand on two corners of the viaduct in order to replicate the historic detailing. The rubbings were used to develop the design and produce accurate stone schedules to allow stone production and carving which took around eighteen months due to the many intricate, highly decorative mouldings incorporated in the facades. Stirling Stone’s masons then built the stone on site therefore the company was involved from inception to completion and the end result is a truly remarkable building of exemplary quality.

The project was also uniquely recognised earlier this year with the ‘City Heritage Award’. A truly fitting way for Stirling Stone to mark 25 years of award winning excellence.

Stirling Stone Limited is a leading UK stonemasonry company providing a comprehensive service in the design, supply and installation of marble,granite, sandstone, limestone and slate for external facades and internal works.

This year they celebrate their 25th trading year and during that time have successfully completed many projects throughout the UK and Ireland from the Shetland Isles in the north to the Channel Islands in the south.

Their portfolio of projects is wide and diverse covering the whole spectrum of stonemasonry skills.

In the commercial sector projects have been completed at major shopping centres in Exeter, Aberdeen, Glasgow, Livingston and Huddersfield. Office developments such as One London Wall and The Gherkin, London, court buildings in Glasgow, Dundee and Edinburgh and Eden Court Theatre, Inverness further illustrate the range and diversity of work undertaken.

Restoration and conservation projects include substantial works to listed buildings over the years at Stirling and Culzean Castles, the G1 building in Glasgow, Lowther Castle near Penrith, Rochester Cathedral, Paisley Abbey and various projects in the Shetland Isles.

The company offers the most comprehensive stone masonry service available in the UK operating from its headquarters in Stirling and London office. Uniquely Stirling Stone has its own in house laboratory for stone and mortar selection and testing. This, combined with a superb design office, production facilities, extensive knowledge of quarrying, experienced contracts management and stone masons, and a worldwide network of supply partners ensure that the company provides an all embracing professional service covering all aspects of stone masonry.