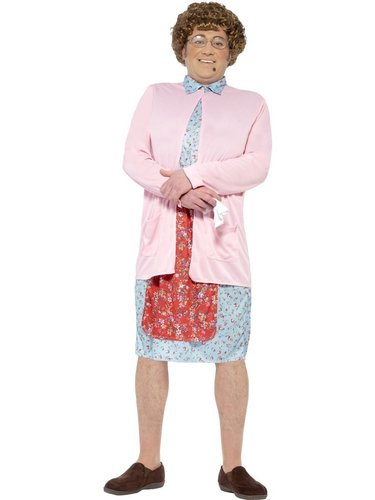 I know that Mrs Brown’s Boys is a Christmas favourite for many families, but I never expected such a level of demand for the costume

Ruth Goodman, whose online fancy dress shop Fancy Dress Bash sells costumes across the globe, is surprised that outfits of the colourful Irish matriarch are selling faster than those of superheroes, which are traditionally strong sellers:

“Superheroes seem to dominate fancy dress parties all year round. The genre has gone from strength to strength in the last ten years and this is reflected in the choices of partygoers.

“I know that Mrs Brown’s Boys is a Christmas favourite for many families, but I never expected such a level of demand for the costume!”

Batman, Spiderman and The Joker were all in the top ten of the men’s list, whereas Superwoman, Batgirl, Wonderwoman, Supergirl and Harley Quinn were in the women’s list.

The female superhero costumes were similarly pipped to top spot by a sitcom character, but in cartoon form: Wilma Flintstone.

Ruth Goodman said, “I’m much less surprised by this – Wilma (and the other Flintstones characters) are classic choices and show no signs of dying out any time soon.

Speaking about the lack of Christmassy characters in the list, she said, “It’s noteworthy that Santa Claus, elves and snowmen haven’t made the top ten lists.

“They are still selling well but we’re seeing a trend towards wearing non-Christmas items in the festive period.

“The volume of sales across the board is unprecedented - we really have been snowed under this winter!”