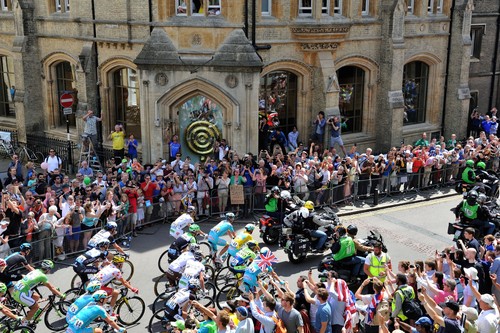 It’s exciting to be displaying the Dragon Chronophage in the country that inspired its creation.

Speaking ahead of the upcoming exhibition, Dr Taylor said, “It’s exciting to be displaying the Dragon Chronophage in the country that inspired its creation. It was a pleasure to work alongside Professor Long of China Academy of Art, Hangzhou.

“I’ve been visiting China on business since the 1960s and it’s always been a place that’s close to my heart.

“The Dragon Chronophage has been popular with the Chinese in the past, due to their brilliant attitude to innovation and design and the authenticity of the Chinese dragon.”

The first of the Chronophage series, Dr Taylor’s Corpus Chronophage, was unveiled in 2008 at an event hosted by world-renowned physicist Stephen Hawking and displayed in Corpus Christi College, Cambridge. Portraying a huge, striking grasshopper, it has made Corpus Christi one of Cambridge’s most popular tourist destinations.

It was followed by the Midsummer Chronophage, which depicts an enormous, mythical fly.

There is also one other Chronophage, which is a private commission.

Here are twelve facts that most people don’t know about the Chronophage clocks:

2. Dr Taylor, the creator of the clocks, also invented the cordless kettle. He has over 400 patents to his name, six of which pertain to the timepieces.

3. Dr Taylor is also a leading expert on the work of John Harrison, an eighteenth-century English horologist who built the first marine chronometer, allowing seafarers to determine their positions at sea.

4. Each Chronophage is three metres tall, and the 1.5 metre diameter clock face is plated in 24 carat gold.

5. The clocks only show the correct time every five minutes. Exploring Albert Einstein’s theory of relative time, they slow down, speed up and occasionally stop.

6. The clock faces have no hands, but instead tell the time with three concentric circles of blue light-emitting diodes (LEDs). The lights do not flash on and off but are obscured and revealed by three stainless steel discs, each with a ring of Vernier slits. When the slits align, the lights are visible. The outer ring shows seconds, the middle shows minutes and the inner ring shows hours.

7. The dragon on the Dragon Chronophage was designed by Professor Long of China Academy of Art in Hangzhou. The design is authentically Chinese – for example, the dragon is accompanied by a pearl, which it swallows every hour. The pearl is a symbol of purity and prosperity.

8. Since its installation in 2008, the Corpus Chronophage has become one of Cambridge’s most popular landmarks. In 2014 the Tour de France passed the clock in its early stages. Vincenzo Nibali, the first rider past the Chronophage, went on to win the Tour.

9. Each of the creatures is a part of the clock’s mechanism. The technical name for this component is a ‘grasshopper escapement’ and it was invented by one of Dr Taylor’s greatest clockmaking influences, John Harrison.

10. The distinctive rippled effect on the Chronophage clock face is created using underwater explosions, and depicts time moving outwards from the centre of the universe after the Big Bang.

11. The construction process is so complex and meticulous that only four Chronophage clocks have been created.

12. The Dragon Chronophage is valued at over £3 million, making it one of the world’s most valuable modern clocks.

Each Chronophage is one of the world’s most exclusive and distinctive clocks, and is as much a piece of art as it is a timepiece.

The Dragon Chronophage, valued at over £3 million, will be on sale at the exhibition, and Dr Taylor will announce that commissions will be taken for the creation of further Chronophage clocks.

Dr Taylor recently appeared on BBC4 Midweek, and spoke to Libby Purves about the Chronophage series. It can be heard here: http://www.bbc.co.uk/programmes/b04ykbjk

Dr John C Taylor OBE, aged 78, was born in Buxton in Derbyshire in 1936. Having spent six years living in Canada during his childhood, he returned home towards the end of the Second World War and attended King William School on the Isle of Man before studying Natural Sciences at Cambridge University.

Dr Taylor has also conducted a lot of research in the subject of horology. His admiration of John Harrison, an early pioneer of clocks and time-keeping, led him to design and help build the Corpus Chronophage, a three metre-high clock that is displayed on the exterior of the Corpus Christi College building at Cambridge University.

Founded ten years ago Media 10 Limited is the most decorated media and events company in the UK.

In the ten years the company has been running, the company has seen its turnover, profits, portfolio and staff numbers grow at a dramatic rate and it now has over one million visitors in attendance at Media 10 events and its publications have over three million readers.
Website: www.media-ten.com