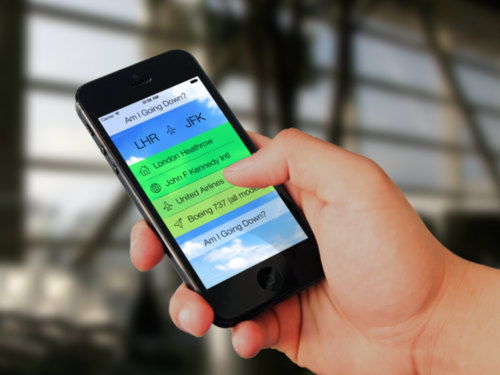 A new app for people who are nervous about flying will help calm their nerves - by giving them statistics on how unlikely it is their aircraft will crash. Called ‘Am I going down?’ the app is designed for iPhone and iPad users and is now in the iTunes app store. (http://appstore.com/amigoingdown)

Fear of flying is very common. In the UK it’s thought as many as 1 in 5 people experience anxiety about flying at some time.* In the U.S., a study by Boeing researchers found that 18 per cent of adults were afraid to fly.** Famous sufferers include footballer Dennis Bergkamp, Actress and MP Glenda Jackson, Boxer Mohammed Ali and former president Ronald Regan.

The app was written by husband and wife developer team Nic Johns and Julie Postlethwaite of Vanilla Pixel. Says Nic Johns, ‘The inspiration for “Am I going down?” came from my co-founder and wife, Julie, who for many years has suffered from a fear of flying. I wanted to present the fact that the vast majority of flights are incredibly low risk and our app is meant as tool to help reassure fearful flyers.‘

Johns adds, ‘The idea for the icon and the name also comes from Julie: it represents the arrivals sign at an airport, which to her phobic eyes looks like a plane “going down”!’

The app is easy to use. You tell it what kind of plane you’re travelling in, the airports you’re travelling to and from, and the app tells you the chances of your plane crashing - which are always many millions to one against happening.

The app gathers its raw data from sources such as ACRO and NSTB for crash statistics, and ICAO for airport data.

In analysing the chance of a crash, the app only includes crashes where there was at least one passenger fatality - which is the relevant statistic for those with a fear of flying. This is then incorporated with the volume of flights, weighted to the most recent 10 years, to provide the final ‘one in a million’ statistics.

‘The simple fact is that flights are incredibly safe,’ says Nic Johns, ‘invariably in the millions to one range, but it’s more useful to someone who is a nervous flyer to know the past performance for their type of aircraft and their particular journey, rather than just generic figures.’

‘The positive response from anxious flyers has been amazing, really encouraging. I've also had great feedback on the visual impact of the app - check out the tiny planes flying by in the background!’

Currently the app is available on iPhone and iPad and Johns says that developing an Android version is ‘definitely a possibility for the future.’

App Features:
- Based on the airline, aircraft model and airports you enter, the app calculates the odds of your flight 'going down'.
- The app also ranks airlines and aircraft on the safety records using very visual imagery (see links to screenshots).

Based in London, Vanilla Pixel is an independent app developer co-founded by husband and wife team Nic Johns and Julie Postlethwaite. The company specialises in the design and creation of apps for iPhone and iPad.

Fear of flying is one of the most common fears for people to have. It is thought that as many as 1 in 5 people may have some degree of fear. In the UK this means about 10 million people have some degree of fear about flying. It is thought that up to 5 million people in the UK will not fly because of their fear. Many of those that do fly do not enjoy it. It causes them stress and anxiety and sleepless nights. The only way many people have of coping is to either avoid flying or use alcohol, cigarettes or pills to calm them if they go on a plane.

One of the most important studies on fear of flying dating back to 1980, when two Boeing researchers found that 18.1% of adults in the U.S. were afraid to fly, and that another 12.6% of adults experienced anxiety when they fly. In short, about one in three adult Americans were afraid to fly.

The study was also interesting in that it provided details about why the surveyed adults avoided flying, with only about 6% doing so because they considered flying unsafe. A more recent poll conducted by Newsweek magazine in 1999 found that 50% of the adults surveyed who flew on commercial airlines were frightened at least sometimes.