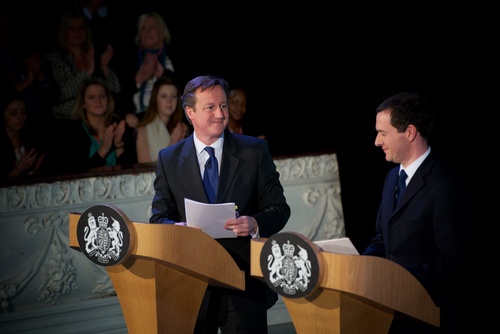 aql’s historic Grade II listed Headquarters, were described as “an extraordinary, iconic location” by the Prime Minister during his announcement of the Long-Term Economic Plan for Yorkshire and Northern Lincolnshire in Leeds yesterday.

The Prime Minister and Chancellor of the Exchequer travelled to the region to promote investment and to announce their plans to add over £13 billion in real terms to the Yorkshire economy by 2030 and ensure over 100,000 more people are employed as part of the creation of a Northern Powerhouse.

The message, which included emphasis on devolving greater powers to West Yorkshire in alignment with the Sheffield City Region devolution agreement, was delivered whilst standing on top of the reinforced glass platform, looking down into one of aql’s secure datacentres and the glistening technology of the internet exchange below them.

David Cameron and George Osborne delivered their Six Point Plan from the high security glass platform over one of aql’s secure datacentres which itself acts as the "Northern Powerhouse" for digital connectivity.

The Prime Minister called for an optimism that’s he said “was overdue”. He gave a message of reassurance, stating that every major measure this part of the country is going in the right direction. He praised the work of Welcome to Yorkshire and it’s CEO, Gary Verity for bringing the Tour de France to Leeds and for the City for creating the grandest of Grand Départ’s.

The Prime Minister said “Our Northern Powerhouse Plan is a strategic long-term view on what the drivers of growth actually are in a modern economy.”,

Investment in infrastructure was also highlighted – including flood alleviation schemes protecting Leeds and the region.

Broadband at superfast speeds, one the core offerings catalysed by aql’s datacentres within the heart of the city, was described as one of the key elements to this plan. Others included excellent transport systems, a critical mass of skilled workers and a thriving science base.

George Osborne described Yorkshire as a Country leader, saying “The economy of Yorkshire is not just growing and creating jobs but on many measures it is now leading the country.“.

Northern Powerhouse : He continued to walk through their six point plan - He viewed the economy of the North as bright if not brighter than other parts of the country, highlighting the ambition to pull the North of England together as a significant aligned force through building a Northern Powerhouse.

The Creative Industries were included as one of the strengths of the region and one of the key sectors for job creation and the achievement of the planned employment targets in the next parliament. The Chancellor continued “Yorkshire is fast becoming a centre for film and television production, it is home to the second fastest growing digital sector outside London. We are quite literally standing on the servers that are driving that revolution.” (referring to the infrastructure in aql’s datacentre, visible through the glass floor beneath his feet). He continued "Many of these servers deliver the content and allow the collaboration of the regions creative sector.".

Transport links are to be improved. Committing specific sums of money dedicated to areas included investment in trains, upgrading links, a Trans-Pennine road tunnel and fixing the bottlenecks of the region. A shared vision was HS3; with an ambition to revolutionise the North of England. He believes the arrival of high-speed rail to Leeds will enable the city to be transformed. Backed by the Leeds Station Regeneration Board, the Department of Transport & Network Rail plans are in motion to upgrade the infrastructure and create the high speed railway network.

For aql, connectivity is not all about transporting people, but also about the transport of data and bringing cities closer together through high speed, low latency connectivity. The Internet Exchange also brings the “internet content” to Leeds, with many of the social networks, streaming TV channels, music libraries and app stores already being hosted within aql’s sites in Leeds.

Technology was included again in the core strengths of the region. TechCity UK released their new Tech Nation report today in Leeds. This highlights the strength of the tech industry across Yorkshire, with facts like 45,000 people working in technology here in West Yorkshire.

Tom Bridges, Chief Economic Development Officer, Leeds City Council, said: “Leeds City Council and IX Leeds will work with other partners such as the LEP, University of Leeds, ODI, Leeds DataMill, and businesses with leading-edge digital capabilities to provide a clear and effective conduit into Leeds for TechCity UK.”.

Data analytics was also highlighted as an important capability in Leeds along with a mention of the newly-formed Big Data Analytics facility at the University of Leeds.

David Hogg, Pro Vice-Chancellor for Research and Innovation at the University of Leeds said he was “…very pleased that the Chancellor had highlighted the opportunity for the further development of our Data Analytics Institute and looked forward to continuing to work with industry and public-sector partners in the City to bring this about.”.

Adam Beaumont, CEO of aql stated “Leeds is just waking up to it’s capability as a Data City. We now have London-independent network connectivity to the US and Europe. aql also hosts the only mutual internet exchange outside of London, providing an interface between many regional and international networks.

The exchange also connects Terabit networks such as the Janet network, providing a high speed conduit between Universities and the private sector, allowing the exchange and analysis of big data.”.

Andy Davidson, Chair of IXLeeds commented: “The exchange is not only a neutral technical infrastructure to enable limitless cooperation between interested parties, but also the perfect forum for those parties to meet and share and develop ideas and form close collaborations.”.


Lesley Cowley, Non-Executive Director at aql added: “The reason aql are interested in Big Data is because of our pedigree in datacentre security and secure storage. We’ve also been involved in the “internet of things” since it’s inception – aql are a smart messaging company – connecting software systems to remote devices and connecting remote devices to networks, securely. We do this by providing secure mobile messaging, specialist data MVNO solutions and satellite machine-to-machine interfaces. Most importantly, we do this with partners – aql are the conduit or the enabler who work with the UK’s leading solutions providers to deliver end-to-end service. We do all of this with a holistic view of security and to ensure the privacy and safety of users is maintained in a connected society.”.

aql, established in 1998, is a wholesale integrated Telecommunications Operator, Regulated by Ofcom. Providing services to many FTSE 100's and is one of the UK’s largest IP Telephony fixed line and Mobile SMS Text messaging operators. It is recognised as a significant market force in fixed and mobile services by the UK Regulator. aql are the largest MVNE (Mobile Virtual Network Enablers) – having created over 35 specialist, secure mobile operators in the UK, many of which are centred around e-health, telemetry and education.

aql are dedicated to building intrinsic value, investing in their own datacentre infrastructure in the heart of Leeds. aql have built three datacentres in Leeds, with a fourth due for completion in March 2015 and a further 1.5 acre site acquired.

aql’s datacentres are the home of IXLeeds – the mutual not-for-profit internet exchange. IXLeeds is the only exchange of it’s kind outside of London, providing a data hub for the North. aql’s datacentres also provide major nodes for many national networks such as SSE, Fujitsu, Cogent, Level(3), Allegro. It is also the main site for the Janet network – providing connectivity to schools, colleges and Universities from Leeds and the Yorkshire region.