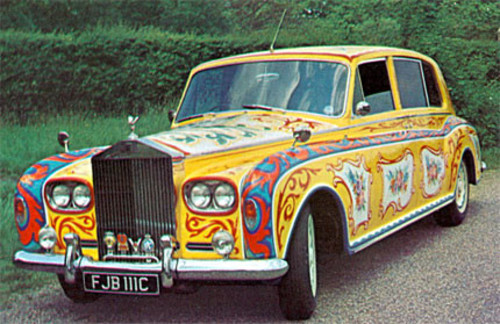 The car will be taken to a number of motoring shows and exhibitions in order for fans to experience the model in its full glory.

The reaction comes following a report in the Newham Reporter detailing a Stratford company who have re-created the Beatles’ legend’s iconic customised vehicle for a fraction of the original’s asking price.

With the original model apparently held within a private collection somewhere in North America at a price of over £20 million, it seemed unlikely the British public would be able to lay eyes on this classic piece of motoring history ever again. JP Fallon, the East London-based premium coachbuilders that worked on the original Phantom V that Lennon had customised, dissolved in the 1980s but former CEO Frank Nash re-established them in July 2014 to begin work on the project.

After years of deliberating undertaking the task, they decide to start the process in order for it to be ready for 2015 – the 90th anniversary of Rolls Royce and the 50th anniversary of Lennon’s car itself. Following locating a model they deemed suitable for the transformation, the company and a team of artists begun the process. Mr Nash estimates that the project itself cost around £100,000.

The car will be taken to a number of motoring shows and exhibitions in order for fans to experience the model in its full glory. A spokesperson for Abbey Rolls Hire, leading providing of Rolls Royce models for hiring, has released a statement following the report. “The sheer level of craftsmanship that has gone into restoring this iconic Rolls Royce Phantom V is really quite staggering.

“This John Lennon Rolls is a car that is etched not only in motoring legend but musical folklore, too. For the original company to come back into business solely for the restoration of this vehicle is a unique occurrence, and highlights the bespoke skills that are needed to undertake such a project. The Rolls Royce and The Beatles go hand in hand as two of the country’s most famous exports, so the fact that an exact replica of the original is now back on home soil is great news for fans of the brand and band alike.”