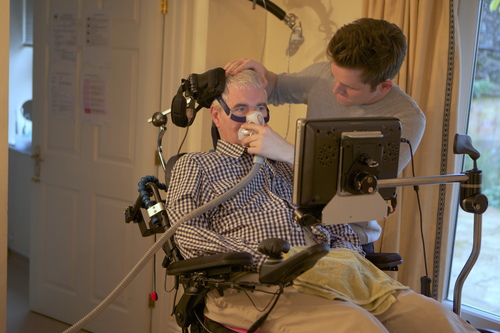 Directed and produced by BAFTA winner Liz Tucker for Verve Productions, this film is a unique filmic record revealing the devastating reality of motor neurone disease, as it has never been seen before. (Transmission details to be confirmed on Wednesday 25th February)

Four and half years in the making, using an innovative approach to capture scenes that would otherwise have been impossible to film. This deeply personal and emotional documentary charts the story of one remarkable man, Steve Isaac, from the moment he received the heart-breaking news, he had motor neurone disease (otherwise known as amyotrophic lateral sclerosis (ALS) or Lou Gehrig’s disease). A fatal condition that would change his and his family’s life for ever.

Liz Tucker, Executive Producer/Director said: “As soon as I met Steve and his family, I was incredibly moved by their story. Seeing a home video that his son Fraser had filmed, made me realise there was an opportunity here to tell this story in a way that had never been attempted before in a documentary”.

Liz wanted to make a film about Steve and his family in which nothing would be contrived or reconstructed. The viewer would experience the action exactly as it happened. So she hired 22 year old Fraser, Steve’s son, to work on the film and planned that he would stay in the family home and be there 24/7 to shoot crises and emergencies as they happened. While Liz would come down to film the rest of the documentary on a day-to day basis.

Fraser Isaac commented: “Some may think it is weird to film your dying Dad, but I want people to really understand what it feels like. Sometimes it’s really tough, but, and this may sound crazy, there’s loads of times when we still really laugh together”.

Capturing every critical event in the story, the moment it happened, has resulted in a remarkably intimate and honest documentary of a family experiencing the most brutal of times.

Liz Tucker, Executive Producer/Director: “Steve and his family put an extraordinary amount of trust in my hands. Editing their story, without sugar coating it, so that all sides of the story are shown fairly and truthfully is one of the hardest tasks I have ever had to wrestle with. And I am very grateful that Channel 5 had the guts and vision to commit to such complex and long running project”.

During the film, we see Steve’s illness progress and his story take a turn no one could have imagined, leading to some devastating decisions.

Liz Tucker, Executive Producer/Director: “The most powerful films I believe are those that take the audience away from its own reality into the lives and minds of others, making them rethink their world. So I hope that viewers will watch this documentary and think, “what would I do?”

Emma Westcott, Channel 5’s Commissioning Editor - Factual, comments: “Viewers will be deeply moved by this emotional and thought provoking journey as we chart the story of this brave and remarkable family from the beginning of Steve’s diagnosis and the years which follow.”

Channel 5 launched as Britain's fifth public service broadcaster in March 1997 and reaches 4 in 5 of the UK viewing public each month with a broad mix of popular content, including quality factual programmes, entertainment, reality, sport, acquired and original drama and pre-school children’s programming through its award winning Milkshake strand. Sister channels 5* and 5USA compliment Channel 5 with a mix of must see entertainment and US drama, while Demand 5 is a free service to catch up with the latest programmes on Channel 5, 5USA and 5* available across platforms and devices including You View, Sky On Demand, Virgin Media, BT Vision, Xbox1, iOS, Android, Freesat, PS4 and Roku. For all the latest about Channel 5, follow us on twitter.com @channel5press and @channel5_tv.

A few facts about motor neurone disease (known as amyotrophic lateral sclerosis (ALS) or Lou Gehrig’s disease in the USA).

• Motor neurone disease is a fatal disease that has no cure.

• Every day, five people in the UK die from the condition.

• The average life expectancy upon diagnosis is usually between two and five years.

• The BAFTA and Golden Globe award winning film, nominated for multiple Oscars, The Theory of Everything, documents the story of world-renowned physicist Professor Stephen Hawking, who has motor neurone disease. He is an exceptional case, having lived with MND for over 50 years.

• Motor neurone disease is a progressive neurodegenerative disease that attacks specialist nerve cells in the brain and spinal cord called motor neurons. Degeneration of these motor neurons causes muscle wastage leading to paralysis, and difficulties with speech, swallowing and breathing.

• MND leaves people unable to walk, talk or feed themselves, but their intellect and senses usually remain unaffected.

• Most patients with motor neurone disease die when their breathing muscles are no longer able to work.


A few facts about Liz Tucker and Verve Productions

• Liz Tucker’s programmes have been shown in over 40 countries and won a number of prestigious awards.

• In 2004, Liz’s film Archimedes’ Secret won the Glaxo/ABSW Science Writer’s Award for best science documentary. A year later, she was again nominated for the award.

• In 2003, the Blood of the Vikings series in which she made two of the programmes was nominated for an RTS for best documentary series. Her first film in the series won the Palmares Award 2004. It also won a Certificate of Merit at the San Francisco Film Festival.

• In 1998, Liz's film Sudden Death part of the Horizon series that won the BAFTA and RTS award for best documentary series. Liz’s film was specifically mentioned in the award.

• ROWING THE PACIFIC - Discovery Channel
Presented by James Cracknell, this is the incredible tale of two men who risked their lives to set a new world record rowing almost 7000 miles across the Pacific Ocean.
TV Times: “Thrilling and inspirational…a fascinating watch”

• THE ULTIMATE CLIMB - Discovery Channel
Presented by James Cracknell, this is the remarkable story of student mountaineer Geordie Stewart, who attempted to climb the highest mountain in each of the world’s seven continents.
The Mail on Sunday: “Compelling and disturbing”

• THE MAN WHO FAKED HIS LIFE - Channel 4
Jean-Claude Romand was the envy of all his friends. Yet the man everyone believed in, didn’t exist at all. For nearly two decades, he lived a tortuous double life, when it finally began to unravel, the result would be fatal.
Sunday Telegraph: “terrific documentary, heartbreaking, incredible stuff”

• WHAT THE ANCIENTS DID FOR US: THE INDIANS - BBC TWO
Historian Adam-Hart Davies explored the technical and medical advances of ancient India.
The Mirror: “ love the series, who says history has to be boring”

• LIFE BEFORE BIRTH - BBC FOUR
Series about the work of Professor Kypros Nikolaides who treats women suffering from life-threatening pregnancies.
The Times: “The combination of medical ingenuity and human kindness is something to behold”

• IN SEARCH OF GENIUS - BBC TWO
What makes a child a potential genius? This documentary followed the progress of mathematical and musical child prodigies to try to discover the answer.
The Observer:”entertaining and illuminating”

• GOD ON THE BRAIN - BBC TWO
This film asked the provocative question: are we programmed to believe in God?
The Times: “It was fascinating stuff”