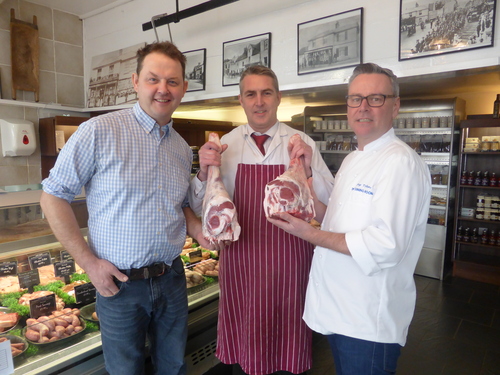 Quality is important to a real butcher – it’s his livelihood

It’s National Butchers’ Week (23 – 29 March 2015) and food-finding network Local Food Britain has revealed the findings of its recent customer survey, which suggest overwhelming support for independent butchers. 93% of respondents perceive their butcher as most trustworthy, while nine out of 10 say quality is more important than price.
Celebrity chef Tony Tobin of The Dining Room in Reigate, Surrey, agrees. He sources meat from Robert and Edwards butchers just a few doors down from his restaurant, and says he appreciates talking to a butcher about the origins of the meat. “Quality is important to a real butcher – it’s his livelihood,” Tobin explains. “When people ask me for dinner party advice, I always say, ‘If you do nothing else, spend on your meat.’ Your butcher is someone you can talk to about what you need.”

Robert Hewitt, the manager at Robert and Edwards butchers, agrees. “Shoppers are always enlightened when they buy from us,” he says. “They find they get more flavour, the provenance is traceable and they can get exactly what they want.”

Of the 529 people who took part in Local Food Britain’s survey, 85% said knowing they are supporting local farmers would make them more likely to buy from a butcher, while another 75% stated that ethical production was a factor in their choice. In addition, more than three quarters of those surveyed indicated they would like to know more about the local farmers who supply their butcher.

However, more than half (55%) said they would welcome ‘at-a-glance’ price labelling, suggesting that some shoppers find buying by weight confusing. “Many people are used to buying a pack of chicken breasts from the supermarket for a fiver without thinking about how much it weighs,” explains Local Food Britain founder, Tracy Carroll. “£25 per kilo for sirloin steak might sound expensive until you realise that an average portion is around 200g. There’s an opportunity for butchers to improve their labelling to help consumers make buying decisions, especially those shoppers who are on a budget.”

“The survey has offered a fascinating insight into how people feel about butchers,” adds Tracy. “Provenance and quality are clearly very important, and independent butchers have a great advantage when it comes to traceability, as many have developed strong relationships with the farmers who supply them. For instance, Robert Hewitt sells lamb to Tony Tobin which originates from Sondes Place Farm, Dorking. That means it travels just 6.7 miles from farm to butcher and then a few metres along the High Street to the restaurant.”

Shoppers who are thinking about popping into their butcher during National Butchers’ Week – perhaps for the first time – can find a variety of tempting offers from butchers across Surrey on Local Food Britain’s website at www.localfoodbritain.com/offers. Meat fans can also find Local Food Britain on Twitter as @localfoodfinder and join in the conversation using the hashtag #ButcherIsBetter.

• For more info and images, please contact Angela, Caroline or Tracy on 01737 823208 tracy@marketplace.uk.com
• Local Food Britain localfoodbritain.com/surrey was set up by Tracy Carroll to support independent food and drink producers. It currently covers Surrey and Sussex, launches in Kent in March 2015 and will be rolled out widely during the year.
• To read more about National Butchers’ Week visit www.nationalbutchersweek.co.uk