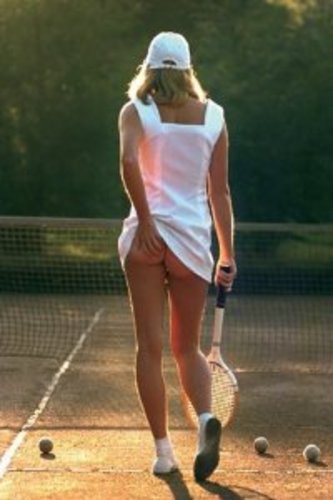 The museum at Wimbledon has been revealed as the mystery buyer of the white mini-dress worn in the iconic Athena Tennis Girl poster.

The All England Tennis Club paid £15,500 at auction last July for both the dress and racket made famous in the 1970s poster, at the time choosing to keep their identity a secret.

But today, the home of tennis unveiled the handmade dress as its latest exhibit, and guest of honour was No5 barrister Carol Knotts who actually made it all those years ago.

Carol, a Personal Injury and Clinical Negligence barrister with No5 Chambers, is thrilled.

She said: “I am absolutely delighted that the dress has been bought by the Wimbledon Museum.

“It could have gone to anyone, private collectors, celebrities, who knows? But I am so pleased that Wimbledon considered it important enough to feature in their museum where it can be enjoyed by everyone.”
As a teenager, Carol played tennis at her local club in Stourbridge, and made the dress from a ‘Simplicity’ pattern. One day, her friend Fiona Butler asked to borrow the dress and racquet for a photo shoot with then boyfriend Martin Elliott. The rest as they say is history.

Martin, who died in 2010, sold the image rights to Athena, and the poster went on to sell more than two million copies.

Carol said: “Before last year’s auction, I’d had the dress tucked away in a cupboard. When I first thought about selling it a few years ago I did think about offering it to the Wimbledon museum but I really didn’t think they would be interested.
“I can’t quite believe that the dress I used to wear to play tennis in will now be part of the Wimbledon Museum collection. It’s incredible.”

The dress was sold by Fieldings Auctioneers in Stourbridge on the day of the Wimbledon ladies’ singles final last July, and at the time was expected to make between £1,000 and £2,000.

Carol, who lives in Gloucestershire, has been with No5 since 2011, having been called to the bar in 1996.

No5, which has its head office in Birmingham and branches in London, Bristol and the East Midlands, is one of the largest sets of barristers chambers in the UK with more than 240 members including 28 Queens Counsel.