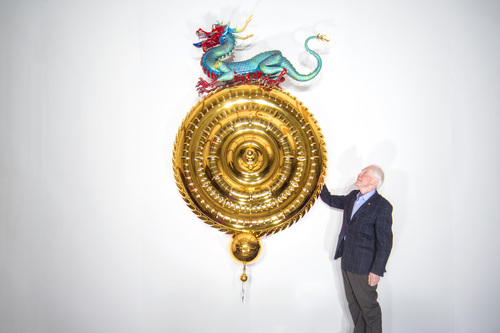 It will be a pleasure to speak at the AD China Design Forum alongside such fascinating designers and creators.

Dr John C Taylor OBE FREng, one of the UK’s most prolific living inventors, will speak alongside other key opinion formers at Design Shanghai at the AD China Design Forum at 10:30AM on Sunday 29 March 2015.

Design Shanghai is China’s premier design event and attracts the global elite of the design and architecture sectors.

Dr Taylor attended Corpus Christi College, Cambridge University before embarking on a career in bimetal controls, in which he invented the cordless kettle. He amassed over 400 patents and worked on iconic design projects such as the Jaguar E-type.

Dr Taylor will be exhibiting the Dragon Chronophage, a three-metre tall clock adorned with a Chinese dragon. Plated in 24-carat gold and employing a unique and patented mechanism, it will be one of the event’s main highlights and will be displayed at stand CB-4.

The Dragon is a working component, pulling the escape wheel around the circumference of the clock face. This is made possible by an ingenious reworking of a traditional clock mechanism, which is protected by six patents and took years to perfect.

The Dragon Chronophage was designed in tandem with one of China’s leading authorities on art: Professor Long of China Academy of Art, Hangzhou. He will also be speaking at the event.

Dr Taylor said, “It will be a pleasure to speak at the AD China Design Forum alongside such fascinating designers and creators.

“The opportunity to get involved in the Design Shanghai experience is one that I find very exciting, especially seeing as it gives me the chance to return the Dragon Chronophage to the country that inspired its creation.”

This remarkable feat of engineering is the third of only four Chronophage clocks to have been created. The first, the Corpus Chronophage, was designed and created as a gift to Dr Taylor’s alma mater, Corpus Christi, and has become Cambridge’s most popular tourist attraction, eclipsing the famous King’s College Chapel.

Dr Taylor knows China well, having done business in Hong Kong in the 1960s and having set up a factory in Guangzhou, Guangdong Province in the 1980s. His experiences as one of the first modern Western businessmen in China inspired a respect for Chinese innovation and motivated him to create the Dragon Chronophage.

The clock is valued at over £3 million (around RMB29 million), making it one of the world’s most valuable modern clocks.

- Appointment as an Officer of the Order of the British Empire in the 2011 New Year honours list for his services to business and horology
- Appointed as a Fellow of the Royal Academy of Engineering for his outstanding contribution to the advancement of British engineering, innovation and commerce
- Being conferred an Honorary Doctorate from UMIST

Founded ten years ago Media 10 Limited is the most decorated media and events company in the UK.

In the ten years the company has been running, the company has seen its turnover, profits, portfolio and staff numbers grow at a dramatic rate and it now has over one million visitors in attendance at Media 10 events and its publications have over three million readers.
Website: www.media-ten.com