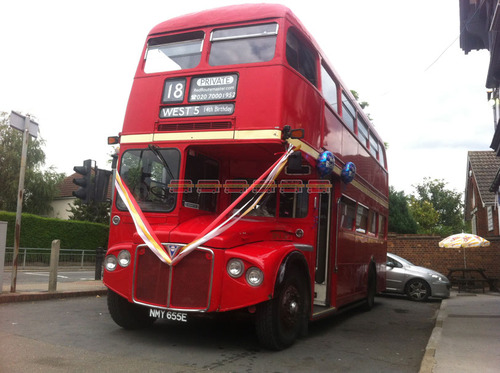 Cynthia and Dennis Marshall first crossed paths on the top of a double decker bus, when Cynthia’s mother first introduced the pair

Vintage London bus hire company, RedRoutemaster, have commented on the 60th anniversary celebrations of a Histon couple who met on top of a double decker bus.

Cynthia and Dennis Marshall first crossed paths on the top of a double decker bus, when Cynthia’s mother first introduced the pair on the number 104 bus from Cambridge to Histon. Cynthia said that she had thought her future husband Dennis was “rather dishy” when she first laid eyes on him across the seats. The pair later went to a dance at the Rex Ballroom in Histon Road, Cambridge, which is where they really hit it off.

The pair lived in a caravan after marrying at Saint Andrew’s Church on March 26th 1955. In 1960 they completed building their first bungalow and Cynthia and Dennis have lived there ever since. Despite Cynthia being diagnosed with lung cancer three years ago, she continues to knit hats and baby clothes for refugee charities and bakes ‘Doolie’ scones. Dennis drives his older friends around to help them go on shopping trips and attend appointments.

“They represent an old Britain which so many of our customers take great joy in reliving when they hire from us. We were delighted to hear about Dennis and Cynthia’s tale about falling in love on an old fashioned double decker. It just goes to show that these iconic vehicles aren’t just retired forms of public transport, but they also hold fond memories for simpler times when love could be found on a local bus journey.”