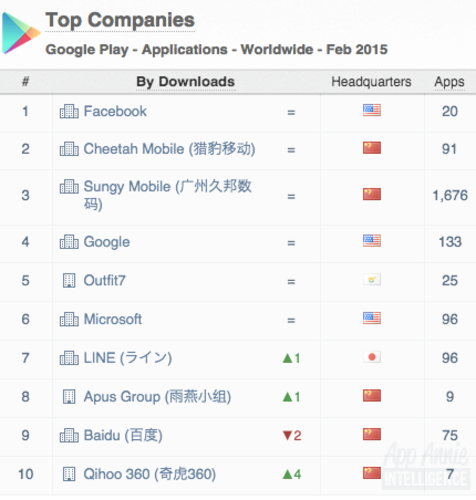 14th April 2015, London: LoopMe, the world’s largest mobile video Demand-Side Platform, today announced that it has signed partnerships with three of the largest global app developers, all of which originate from China: Cheetah Mobile, Sungy Mobile and Baidu, to supply its native video ad formats globally.

This is a major milestone and LoopMe now has partnerships to place mobile video with seven out of the top ten global app developers including Facebook (LiveRail), Google (AdX), Microsoft and Outfit7. This collectively gives LoopMe access to apps with over 10 billion global downloads. The company believes that native video advertising will be worth over $100 million in revenue to LoopMe over the next 2 years with huge potential from these new partnerships.

The partnerships enable app developers to win new revenues from the $200bn brand TV advertising market. As consumers increasingly move to accessing content on mobile, LoopMe and leading analysts such as eMarketer and Mary Meeker of Kleiner Perkins Caufield Byers expect brand advertising dollars to continue to move to the mobile screen.

Native ads are specifically designed to fit into an app’s interface, making them less obtrusive to users than ad spaces, and more likely to be noticed. On top of the native proposition, the mobile video ad format is also extremely effective, compelling and engaging enough to drive conversion rates up to 100% higher than other static formats, according to LoopMe campaign data.

Stephen Upstone, LoopMe’s CEO and Co-Founder, commented: “These are significant partnerships and a major milestone for LoopMe and the mobile advertising industry by enabling native mobile video on the top global apps by volume of downloads according to App Annie. LoopMe’s vision is that mobile video becomes ubiquitous with native, full-screen and pre-roll video ads bought programmatically from LoopMe’s platform. With this vision, the largest reach of global consumers, the most advanced data targeting and machine learning based optimization become increasingly critical to advertiser success.”

Said Patrick Zhu, Sungy Mobile’s COO, commented: “Given the size of our global mobile advertising footprint and the potential opportunity for video, working alongside a strong partner like LoopMe, will enable us to open up new video advertising revenue streams from brand and performance advertisers. It’s a win-win situation.“

LoopMe uses big data and artificial intelligence to target audiences in real time and automatically optimize campaigns for the best possible results for advertisers and publishers.

The LoopMe platform integrates with ad exchanges and direct publishers, including some of the world’s most popular apps, many of which have achieved over a billion downloads, giving LoopMe massive global reach.

LoopMe was founded by experienced mobile advertising executives Stephen Upstone (CEO) and Marco Van de Bergh (CTO), with the mission to increase the value advertisers gain from mobile advertising by giving them more engaging ad formats that not only improve the end-user experience but also deliver better performance for the campaigns.

For more information please visit www.loopme.com or contact the team.