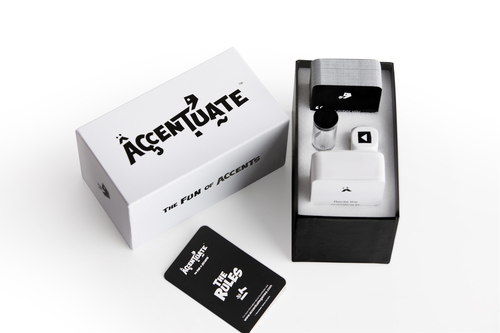 the slick new party game that makes grown-ups squirm with embarrassment – the worse the accent attempts are, the more hilarious the game becomes

Those who truly love their dads, embarrass their dads. So forget the socks and mugs this Father’s Day – give Dad something which will have the whole family roaring with laughter: Accentuate.

Can your Dad copy a Cockney, mimic a Mancunian or ape an Australian? If his imitation skills are up to scratch, he’ll go far in Accentuate, the game that boasts a simple yet humiliating premise: repeat a given quotation aloud in a randomly selected accent and see if teammates can guess what it is! It’s the slick new party game that makes grown-ups squirm with embarrassment – the worse the accent attempts are, the more hilarious the game becomes as players struggle to separate their Geordie from their German and their Scouse from their Spanish.

Featuring 30 different drawls from around the globe – a third of which are home-grown British accents – Accentuate players are under blush-inducing pressure to perform, with just thirty seconds to utter one of the 90 quotations in their allotted accent.

The distinctive black and white Accentuate box comes complete with 90 Accent Cards featuring 30 different accents from around the globe (each repeated three times), 90 different Quotation Cards, a timer and a dice to select game-play options. Its compact size makes it ideal for travelling too.

Accentuate (RRP £19.99) is for four or more players aged 16+. It’s available to buy now from Firebox.com, John Lewis and AccentuateGames.com