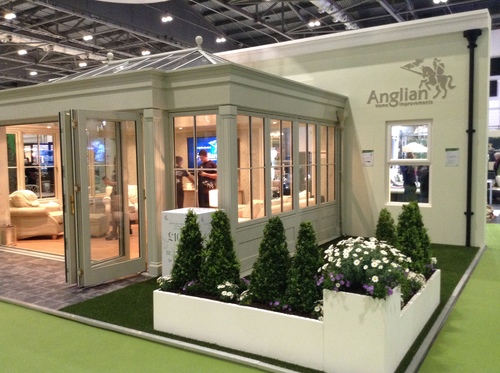 In addition to the timber orangery, Anglian’s double glazed and triple glazed A rated Top Hung windows were showcased on the stand, as well as traditional downpipes and hoppers from its rooftrim range.

Visitors to the Anglian stand were given a chance to win £1,000 cash in the Grand Giveaway Butterfly Hunt by spotting the six Great British butterflies hidden on the stand. The lucky winner will be drawn at random towards the end of May.

TV presenter and environmentalist Philippa Forrester, who is also a brand ambassador for Anglian Home Improvements, gave talks at the show on her five golden rules for Eco Living. This included keeping the home well insulated through the use of draft excluders, cavity insulation and by installing double and triple glazing.

Anglian’s Marketing Director Martin Troughton was one of three judges – along with Grand Designs’ Kevin McCloud and celebrity garden designer James Alexander-Sinclair – who selected the winner for the Grand Designs Live London Garden Designer of the Year. Marc O'Neill was chosen by the panel as the worthy winner for his imaginative design that included a curved wall containing ferns, wildflowers and variety of greenery, as well as a sunken copper pool to support wildlife.

Caroline Mills, Head of Marketing Communications at Anglian Home Improvements, said, “This year’s Grand Designs Live has been another great success, with huge numbers of visitors and plenty of interest in Anglian’s timber orangery and A rated windows. We are proud once again to be the headline sponsor of the Grand Design Live shows, both in London and Birmingham, and have been delighted to have this opportunity help visitors to the show with their home improvements.”

Established in 1966 and celebrating its 50th anniversary in 2016, Anglian Home Improvements is the UK’s leading home improvements company. With almost half a century’s experience, Anglian ensures it is ahead of the competition with a continuing research and development programme. Anglian offers a range of home improvement products, including double and triple glazed windows and doors, conservatories, orangeries and rooftrim.

For more information about Anglian Home Improvements and its wide range of products and options, visit www.anglianhome.co.uk

This press release was distributed by ResponseSource Press Release Wire on behalf of Anglian Group in the following categories: Home & Garden, for more information visit https://pressreleasewire.responsesource.com/about.